Results gained from the continued momentum in its core brands — Calvin Klein and Tommy Hilfiger — along with pricing actions. However, the ongoing macroeconomic challenges, particularly in Europe, and continued COVID impacts in Asia remained headwinds.

That said, management remains on track with its PVH+ Plan, which aims at product strength and consumer engagement, direct-to-consumer, digital enhancement and improving its supply-chain capabilities, which are likely to result in substantial cost efficiencies and better productivity.

PVH Corp reported adjusted earnings of $2.60 per share, down 2.6% from the year-ago quarter's $2.67. However, the bottom line beat the Zacks Consensus Estimate of $2.13. On a GAAP basis, the company reported a loss of $2.88 per share against earnings of $3.89 in the prior-year quarter.

In the fiscal third quarter, revenues fell 2% year over year (up 7% on a cc basis) to $2,281 million. This is mainly due to the impacts of the Ukraine war, such as Russia store closures, the cessation of wholesale shipments to Russia and Belarus, and a reduction in wholesale shipments to Ukraine. However, the top line surpassed the Zacks Consensus Estimate of $2,232 million.

On the flip side, the company witnessed growth across all regions and in its Tommy Hilfiger and Calvin Klein brand businesses. Strength in its international businesses, as well as improvements in North America, particularly in the direct-to-consumer business, acted as other upsides.

Direct-to-consumer revenues fell 5% year over year in the quarter, whereas Wholesale revenues plunged 2%. Revenues in the digital channel declined roughly 12% in the quarter under review.

The company's gross profit amounted to $1,274.2 million, down 5.3% year over year. The gross margin contracted 180 bps to 55.9% due to higher costs and increased promotions, which more than offset gains from price increases. This also includes unfavorable currency impacts of 40 bps.

Adjusted selling, general and administrative expenses decreased 2% year over year to $1,068.3 million. Adjusted earnings before interest and taxes totaled $220 million compared with $266 million in the prior-year quarter. This mainly resulted from reduced expenses in the prior-year period due to store closures in certain regions. The metric also included $30 million of adverse foreign currency impacts.

Revenues from the Calvin Klein segment inched up 1% year over year. Sales from Calvin Klein North America fell 4%, while the same for Calvin Klein International rose 9%.

The Heritage Brands segment's revenues plunged 4% year over year in the quarter under review.

PVH Corp ended the quarter with cash and cash equivalents of $457 million, long-term debt of $2,109.1 million, and stockholders' equity of $4,822.8 million. The company also bought back $102 million of shares under its existing $3-billion share repurchase program in the quarter under review.

Management revised its fiscal 2022 outlook and issued the fiscal fourth-quarter view. For fiscal 2022, revenues are anticipated to be at the higher end of the earlier mentioned year-over-year decrease of 3-4% (up 3-4% on a cc basis). This is inclusive of a 2% reduction each for the exit of the Heritage Brands Retail business and the war in Ukraine.

The bottom line is expected to be $8.25 for the year, up from the $8.00 per share mentioned earlier. However, the company reported $10.15 last year. Interest expenses are likely to be $85 million, suggesting a decline from the prior year’s reported figure of $104 million. Also, the effective tax rate is expected to be 64% on a GAAP basis and 24% on an adjusted basis.

For fourth-quarter fiscal 2022, management expects a 4% year-over-year revenue decline. This is inclusive of a 2% decline from the war in Ukraine. The bottom line is likely to be 45 cents on a GAAP basis and $1.65 on an adjusted basis. Notably, the company reported $3.89 and $2.67 on a GAAP and non-GAAP basis, respectively, in the year-ago quarter. This includes unfavorable currency impacts of 27 cents, as well as 15 cents of adverse impacts of the Ukraine war.

Interest expenses for the fiscal fourth quarter are likely to remain flat year over year. Notably, it reported $24 million in the year-ago period. The effective tax rate is expected to be 80% on a GAAP basis and 25% on an adjusted basis. 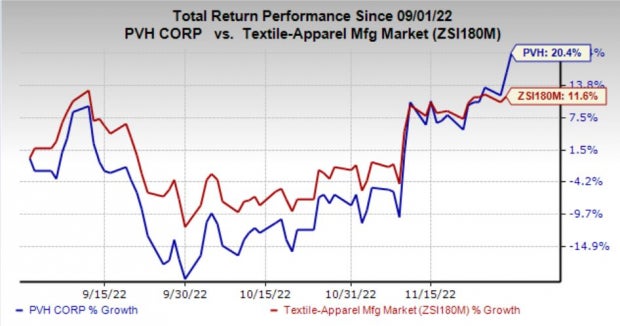 PVH Corp announced the extension of its license agreements with G-III Apparel Group from 2025 to 2027. The deal will enable the smooth transition of core product categories back to PVH at the end of the extended terms.

The transaction mainly includes Calvin Klein and Tommy Hilfiger brands in the United States and Canada, particularly the women’s North America wholesale business. The move is part of the PVH+ plan, which is a multi-year strategic growth plan to unlock the full potential of the company’s two iconic brands in the North America market.

lululemon presently carries a Zacks Rank #2 (Buy). The company has a trailing four-quarter earnings surprise of 10.4%, on average. LULU has an expected long-term earnings growth rate of 20%.

The Zacks Consensus Estimate for lululemon’s current financial-year sales and earnings suggests growth of 26.7% and 26.8% from the year-ago period’s reported numbers, respectively.

Boyd Gaming currently carries a Zacks Rank #2. The company has a trailing four-quarter earnings surprise of 11.2%, on average. BYD has a long-term earnings growth rate of 12.8%.

The Zacks Consensus Estimate for BYD’s current financial year’s sales and EPS indicates growth of 4.4% and 11.7%, respectively, from the year-ago period’s reported levels.

Crocs currently has a Zacks Rank #2. CROX has a long-term earnings growth rate of 15%. The company has a trailing four-quarter earnings surprise of 18.2%, on average.

The Zacks Consensus Estimate for CROX’s current financial-year sales and earnings suggests growth of 51.5% and 23.7% from the year-ago period’s reported numbers, respectively.