Low Volatility ETFs in Vogue Despite a Bull Market

U.S. markets may have been on cloud nine in the last one month, following an extremely volatile or rather a downbeat June, but could not leave a scar on the low volatility ETFs. These apparently safe products – which normally do not surge in a bull market but offer protection in the troubled time – are still in fettle no matter how highs stocks have hit (read: Top ETF Stories of July).

This is because, the recent ascent in the market was not at all free of fear thanks to mounting tensions, be it Fed hike uncertainty or global growth worries, yet-unseen threats from Brexit, earnings recession or oil price upheavals.

In fact, investors seem to have little faith in the recent rally as volume remains a little weak. For example, SPDR S&P 500 ETF (SPY - Free Report) added about 0.3% on August 3, after slight losses in prior days. But this rise was supported by weaker trading activity as about 46.5 million shares exchanged hands on August 3 compared with the three-month average of 96.7 million shares.

In the chart below, we can also see that volumes of SPY in July – when it hit record highs several times – were slightly subdued than earlier months when the fund was range bound or was not performing soundly. 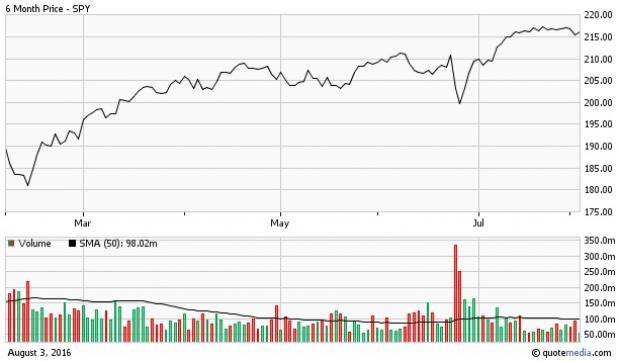 This means that fear levels were associated with the recent rises in the broader market, keeping opportunities open for low-volatility ETFs during this period.

Reasons Why Low Volatility ETFs Were and Will Be in Vogue?

Analysts like Goldman Sachs, Deutsche Bank and Jeffrey Gundlach, the chief executive of DoubleLine Capital do not have high hopes on the S&P 500’s journey ahead. Overvaluation in stocks amid tepid corporate earnings, global macroeconomic doldrums especially in Europe and uncertainty over growth in China keep them wary.

With U.S. GDP data for the second quarter coming at 1.2% versus 2.6% expected and factory output growth slowing somewhat in July (though it remained in the growth territory for the fifth successive month) and missing estimates, questions began to arise on the health of the U.S. economy. Alongside, U.S. construction spending declined for three months in a row in June. Oil prices too became erratic as supply glut worries crept in again.

In such volatile times, it’s prudent for investors to follow a proper trading strategy which ensures risk-on sentiments along with stability. In fact, most of the low-volatility ETFs have higher P/E ratios than that of SPY at the current level.

As per Morningstar, about $6.2 billion was invested in the iShares Edge MSCI Minimum-Volatility USA ETF (USMV - Free Report) in the first half of 2016 while the PowerShares S&P 500 High Dividend Low Volatility Portfolio ETF (SPHD - Free Report) amassed about $1.4 billion.

Below we highlight a few low-volatility ETFs that offered more or somewhat similar returns as SPY in the last one-month period (as of August 3, 2016). These ETFs could be in focus in the days to come.

The fund delivers exposure to low volatility by investing in small cap equity securities. The fund charges 12 bps in fees and yields about 2.76% annually (as of August 3, 2016) (read: Fear Volatility in Small Caps? Try These Low Volatility ETFs).

The fund also gives low volatile exposure to the small-cap stocks, but by tracking the S&P SmallCap 600 Low Volatility Index. The fund charges 25 bps in fees.

It is focused on emerging market stocks with potentially lower risk. The fund charges 25 bps in fees and yields 2.42% annually (as of August 3, 2016) (read: Another Emerging Market Focused ETF Launched).

As per the issuer, “the Long/Cash Index tactically reduces its exposure to the equity markets during periods of significant market decline and reinvests when market prices have further declined or rebounded.” This fund also has a small-cap focus.