Are Hedge Fund ETFs Good Bets for Only Uncertain Times?

The hedge fund investing technique charms many retail investors as they believe that these deploy unique methods or offer exposure to lower risk strategies, and thereby produce some level of outperformance.

Thanks to this sentiment, the space has seen substantial growth lately with new funds trickling into the area. But this perceived low-risk exposure or uncorrected nature to equity or fixed income markets come at higher costs. Investors should note that expense ratios of hedge fund ETFs range from 0.38% to 1.50% while the expense ratio of the broader market fund iShares Core S&P 500 IVV is just 0.04% (read: Buy These ETFs as BlackRock Cuts Fees).

Moreover, thanks to illiquidity (as average daily trading volumes range between just 550 to 150,000 shares), these ETFs have a wide bid/ask spread ratio and higher trading costs. But does the performance of hedge fund ETFs justify the high cost? Let’s take a look.

If you look at the performance between the SPDR S&P 500 ETF Trust SPY and IQ Hedge Multi-Strategy Tracker ETF QAI one can easily make out how badly hedge funds have fallen short of the broader market this year. So far in 2016 (as of November 29, 2016), QAI is up just over 0.3% while SPY is up 8.4%. In fact, QAI hugely underperformed SPY in the one-year, two-year and five-year frames. 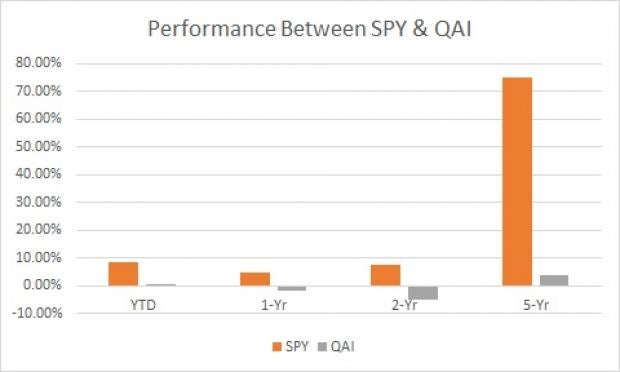 Agreed, at troubled times, a few hedge fund ETFs especially those with long/short strategies beat the broader market, but over the long term they fail to appeal investors in terms of returns. As per Goldman Sachs, ‘hedge funds are poised to get beaten for the eighth year straight.’ These funds have offered a meager 4% return on average against over 8% by the S&P 500 (read: Alternative ETFs to Fight the Slump).

Why Goldman Sees Hedge Fund to Underperform in 2016 Too

As per Goldman, hedge funds beat the broader index in Q3 on the back of the tech stocks’ surge. Information technology stocks hold about 24% in hedge-fund baskets, the maximum allocation in more than a decade.

But Trump’s win is viewed as unfavorable for tech stocks due to his uncertain/controversial policies regarding immigration, trade and outsourcing. Technology Select Sector SPDR ETF (XLK - Free Report) gained 1.4% in the last one month (as of November 29, 2016) compared with over 10% returns in Q3 (read: What Tech Crash? These ETFs are Still Top Picks).

Goldman also went on to explain that hedge funds fizzled out due to their less focus on financial stocks which have outperformed lately on rising rate expectations. However, the funds' considerable investments in the healthcare industry offered it some cushion against the tech-induced sell-off.

What Lies in the Fate of Global Hedge Fund Industry?

Having said this, we would like to note that even with this low return, hedge fund industry AUM reached $3.24 trillion at the end of Q3. As per Preqin, just positive returns, not stellar returns, across most strategies led to AUM growth, though a trend of steady redemption is prevalent in the space.

Preqin’s report also showed that a greater share of funds based in North America experienced outflows (42%) than inflows (40%). But fund managers in other regions saw assets flowing in more rather than gushing out.

So, while things are not too optimistic for the space, skeptical investors looking for only positive returns and unnerved by Trump, oil and Fed related volatility, may still find these as compelling bets. Investors should note that hedge fund ETFs including Cambria Value and Momentum ETF VAMO, Aptus Behavioral Momentum ETF BEMO and AlphaClone Alternative Alpha ETF ALFA returned in line with SPY in the last 10 days (as of November 29, 2016).