Will Muni Bond ETFs Bleed Under Trump or be Contrarian Bets?

The municipal bond market has been under pressure in the last one month (as of December 2, 2016) with most of the muni ETFs having lost in the range of about 8—0.1%. While the broad-based bond market rout thanks to higher inflationary expectations and the resultant rise in yields troubled the muni bond space, Trump’s win in the U.S. presidential election on November 9 can also be held responsible for the underperformance (read: The Trump Effect: 8 Must-See ETF Charts).

Why Could Trump Presidency be a Headwind to Muni Bonds?

Municipal bonds are an excellent choice for investors seeking a steady stream of tax free income. Usually, the interest income from munis is exempt from federal tax and may also not be taxable per state laws, making these especially attractive for investors in the high tax bracket looking to reduce their tax liability.

Now, with Trump pledging for lower personal income tax rates, investors’ desire for a tax-shelter in munis should be quelled in the coming days. Also, investors should note that though munis yield better than treasuries, these are less safer bets than government bonds.

Now, with the Fed expected to hike rates faster in the future, yields in safer U.S. government bonds will also be higher, thus crippling demand for munis – which will less likely be a tax haven in Trump residency. Plus, Trump has proposed to increase infrastructure spending. If this happens, munis will be forced to issue more bonds offering higher yields amid diminishing demand (read: Top ETF Stories of November: Spotlight on Election & OPEC).

However, Citigroup believes that historically (since 1980) retail demand of munis displayed lesser sensitivity on changes in marginal tax rate. But rising rate concerns in any case will not let munis be an obvious winning asset class ahead.

As a result, popular muni bond ETF iShares National Muni Bond MUB lost about 3.3% till December 2, 2016 since the election result was declared on November 9. As per an article on MarketWatch, the Standard & Poor’s Municipal Bond Index following over 91,000 issues closed out with 3.46% losses, marking the most awful “total monthly return for U.S. munis since a 4.83% fall in September 2008.”

Investors should also note that about as much as $3 billion of funds gushed out from muni bond mutual and exchange-traded funds in the week right after the presidential election, representing “the largest such withdrawal since June 2013, according to EPFR Global and Bank of America Merrill Lynch.”

Having said this, we would like to note that the new-issue calendar already shrank on the expectation of the Fed’s policy tightening. “Municipal issuers plan to sell about $10 billion of bonds over the next 30 days, down from as much as $25 billion in mid-October” as per Bloomberg. So, many analysts are finding the recent selloff in munis as a ‘buy-the-dip” moment.

Investors should also note that MUB has a relative strength index of 20.63 at the time of writing, indicating that the fund is in an oversold territory and can exhibit a reversal ahead. Plus, even after the recent drop, MUB is still performing way better than iShares 20+ Year Treasury Bond (TLT) (read: Is the Treasury Bond ETF Rally About to End?).

Is There Any Better Plays in Muni Space?

There are very few muni bond ETFs that still stayed afloat or lost the least in recent trading sessions. The ability to combat the negative impact of rising rates actually made those funds survivors. Given below are the options (see all muni bond ETFs here).

The index of the fund looks to track the performance of tax-exempt VRDOs issued by municipalities in the U.S. on which yields generally reset on a weekly basis. VRDOs are high-quality, floating-rate bonds that provide investors with tax-exempt income. The fund charges 25 bps in fees. 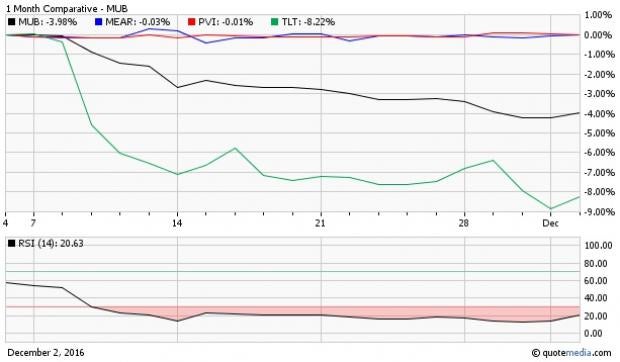 Zacks' free Fund Newsletter will brief you on top news and analysis, as well as top-performing ETFs, each week. Get it free >>