Aerospace giant The Boeing Company (BA - Free Report) has secured a foreign military sales (FMS) contract for the procurement of 51 full rate production Lot 90 Harpoon weapon systems, components and spares. These will be delivered to the governments of Egypt, Korea and Brazil.

Valued at $207.5 million, this deal was awarded by the Naval Air Systems Command, Patuxent River, MD. Majority of the work related to this contract will be performed at St. Charles, MS, and the rest at various states across the U.S.

Per the terms of the agreement, Boeing will also offer the components and spares for the U.S. Navy as well as the governments of Japan, Australia, Thailand, India, United Arab Emirates, Oman, Kuwait and Taiwan. The contract will utilize fiscal 2017 weapon procurement (Navy) and foreign military sales funds. Work is scheduled to be over by Mar 2021.

Harpoon is an over-the-horizon, anti-ship missile manufactured by Boeing’s Defence, Space & Security business division, which is capable of performing both land-strike and anti-ship missions. Its accurate navigation solution allows users to discriminate target ships from islands or other nearby land masses or ships.

This all-weather missile can engage a wide variety of land-based targets, including coastal defense sites, surface-to-air missile sites, aircraft, port or industrial facilities, and naval ships anchored in ports. The missile can be deployed from submarines and surface ships such as fast patrol boats, destroyers and frigates as well as mobile land-based truck platforms and a variety of U.S. military aircraft and mobile land-based truck platforms.

With the recent rise in terror across the globe, particularly threats by radical institutions with access to weapons, manufacturers of missiles and missile defense systems are enjoying steady demand. This has compelled developed nations to build their defense by stocking up on tactical weaponries.

Notably, majority of the top 10 weapon manufacturers hail from the U.S. Considering this, Boeing is poised to gain traction in the aerospace and defense industry with the global missiles and missile defense system market projected to grow at a CAGR of 4.93% during 2014–2024, to reach a value of $38.5 billion.

Boeing has climbed 9.3% over the last one year, underperforming the Zacks categorized Aerospace-Defense industry’s gain of 11.2%. This could have been triggered by budget volatility, uncertainties related to high-cost programs, risks associated with key project executions and order cancellations that have plagued this aerospace major for quite some time now. The company has also put up a weak show in comparison to other major players in the same space like Northrop Grumman Corp (NOC - Free Report) , General Dynamics Corp. (GD - Free Report) and Lockheed Martin Corp (LMT - Free Report) , all of which have outperformed the industry. 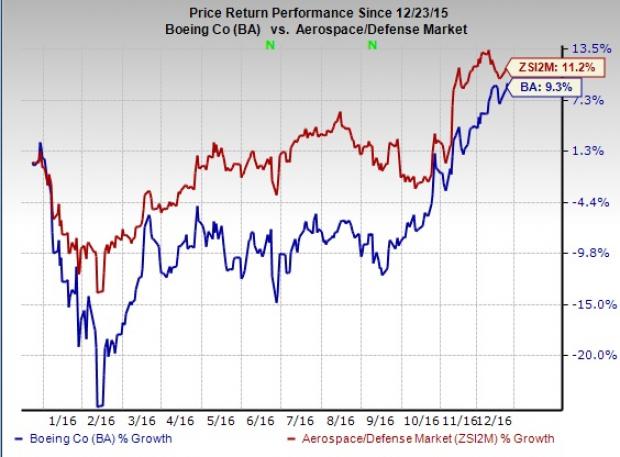 Today, you are invited to download the full list of 220 Zacks Rank #1 ""Strong Buy"" stocks – absolutely free of charge. Since 1988, Zacks Rank #1 stocks have nearly tripled the market, with average gains of +26% per year. Plus, you can access the list of portfolio-killing Zacks Rank #5 ""Strong Sells"" and other private research.See these stocks free >>

Capella Education Rallies to a 52-Week High on Innovation