Per the terms of the agreement, Electric Boat will exercise options to procure whole Block IV Virginia-class submarines mechanical and electronic repair parts that will be stored on the ship while at sea.

Work related to this deal is scheduled to be completed by Jun 2019 for SSN 792 and by Nov 2019 for SSN 793. It will be executed in Groton, CT. The company will utilize fiscal 2014 shipbuilding and conversion (Navy) funds.

A Brief Note on Virginia-Class Submarines

Attack submarines are designed to seek and destroy enemy submarines and surface ships. Currently the Navy has three classes of nuclear-powered attack submarines — Virginia-class, Ohio-class and Los Angeles-class. These submarines will be operational through 2070.

As one of the only two contractors in the world equipped to build nuclear-powered submarines, General Dynamics enjoys a dominant position as a Navy contractor. The company continues to be a prime contractor for the development of Virginia-class submarines, with Huntington Ingalls Industries Inc. HII acting as the subcontractor.

The fiscal year 2017 budget proposal calls for $582.7 billion in funding for the Pentagon, which includes $71.4 billion for R&D and $8.1 billion for submarines (with over $40 billion in the next five years). Going forward, this will definitely drive growth at General Dynamics’ nuclear submarines division.

General Dynamics’ revenue exposure is spread over a broad portfolio of products and services that will keep the overall growth momentum steady. Electric Boat is a unit of Marine Systems. Marine Systems is a leading U.S. shipbuilder, designing, building and supporting a diverse portfolio of ships for the Navy and commercial customers. In partnership with the Navy, Electric Boat has been successfully pursuing its goal to reduce ship costs while focusing on improving overall efficiency.

General Dynamics gained 25.6% over the past one year, outperforming the Zacks categorized Aerospace-Defense industry’s gain of 10.9%. This could be because General Dynamics consistently maintains a strategic alliance with the U.S. Department of Defense, which allows it to enjoy a steady flow of contracts. Consistent deal wins also allow its peers like Lockheed Martin Corp. LMT and Northrop Grumman Corp. NOC keep up their industry-leading performance. 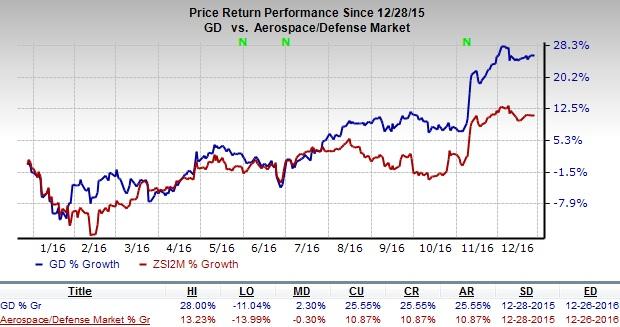