Barring one-time items, adjusted earnings for the reported quarter were 78 cents per share, topping the Zacks Consensus Estimate of 75 cents.

Revenues fell around 4% year over year to $696.7 million in the reported quarter. Sales fell in the quarter as higher sales volumes, favorable price and mix impacts in certain businesses and favorable currency impact were more than offset by divestitures of the company’s metal sulfides and minerals-based flame retardants and specialty chemicals businesses. However, sales beat the Zacks Consensus Estimate of $599.8 million.

Sales from the Lithium and Advanced Materials unit jumped 30% year over year to $278.3 million in the reported quarter, supported by favorable currency and pricing impacts and higher sales volumes.

The Bromine Specialties segment raked in sales of $194.5 million, up roughly 13% year over year, aided by favorable currency swings and higher sales volumes.

Revenues from the Refining Solutions unit was $193.1 million in the reported quarter, down around 4% year over year. Sales were affected by unfavorable currency and pricing impacts as well as lower sales volumes.

Moving ahead, the company noted that its performance in 2016 and strategic initiatives have positioned it for strong growth in 2017. Albemarle sees net sales in the band of $2.8 billion to $2.95 billion and adjusted earnings per share of between $4.00 and $4.25 for 2017. Adjusted EBITDA for the year is expected to be between $800 million and $840 million.

Albemarle’s shares have gained 64.4% over a year, outperforming the Zacks categorized Chemicals-Diversified industry’s gain of 28.5% over the same period, partly reflecting its forecast-topping earnings performance over the trailing four quarters. 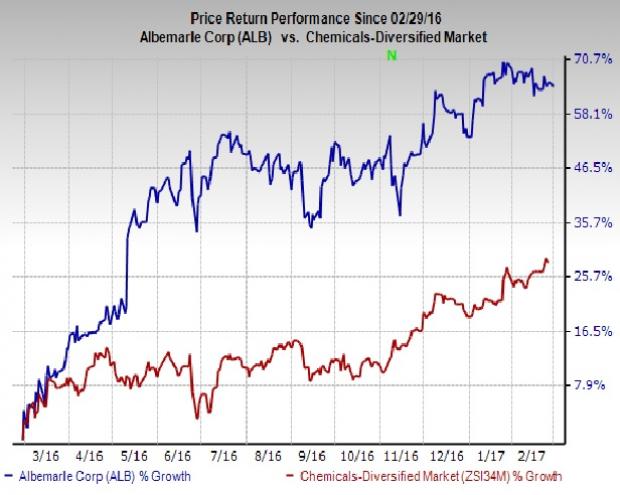 Other well-placed companies in the chemical space include Celanese Corporation (CE - Free Report) , Cabot Corporation CBT and The Chemours Company CC, all sporting a Zacks Rank #2. You can see the complete list of today’s Zacks #1 Rank (Strong Buy) stocks here.

Celanese has an expected long-term growth of 8.8%.

Cabot has an expected long-term growth of 12.1%.

Chemours has an expected long-term growth of 15.5%.

A Full-Blown Technological Breakthrough in the Making

Zacks’ Aggressive Growth Strategist Brian Bolan explores autonomous cars in our latest Special Report, Driverless Cars: Your Roadmap to Mega-Profits Today. In addition to who will be selling them and how the auto industry will be impacted, Brian reveals 8 stocks with tremendous gain potential to feed off this phenomenon. Click to see the stocks right now >>