Once again, a tweet kept the biotech industry on edge with President Donald Trump declaring that he is “working on a new system where there will be competition in the Drug Industry” and “pricing for the American people will come way down”. The tweet triggered a 1.6% decline in the NASDAQ Biotechnology Index in a single day. However, no details were provided as to how this will be achieved.

Concert Hits 52-Week High on Vertex Deal: Concert CNCE, a clinical-stage company, was up 62.1% on a deal worth up to $250 million with Vertex VRTX for its CFTR potentiator CTP-656. Vertex, a key player in the cystic fibrosis (CF) market, will develop CTP-656 for use in future combination regimens for the treatment of the underlying cause of CF. Vertex’s CF portfolio comprises drugs like Kalydeco and Orkambi (Read more: Vertex to Buy Concert's Cystic Fibrosis Candidate for $160M).

TG Therapeutics Soars on Cancer Drug Data: TG Therapeutics’ shares shot up more than 90% on positive data from a late-stage study on its investigational cancer treatment, TG-1101 (ublituximab). Results showed that TG-1101 plus AbbVie’s Imbruvica increased the overall response rate (ORR) by more than 70% compared to Imbruvica alone in patients with high risk chronic lymphocytic leukemia (CLL). Full data will be presented at a medical meeting in the first half of the year and the company intends to meet with the FDA in the second half to discuss the data and file for accelerated approval.

Ionis Down despite Positive Data on Volanesorsen:  Even though Ionis IONS presented positive data from a late-stage study on volanesorsen, the company saw its shares losing ground on safety concerns. Volanesorsen cut down triglyceride levels in patients with familial chylomicronemia syndrome (FCS) by 77% after 3 months compared to an 18% increase in the placebo arm. However, many patients experienced a decline in platelet counts along with the decrease in triglycerides. There were five discontinuations in the volanesorsen arm due to declines in platelets though there were no patient discontinuations once platelet monitoring was implemented.

Ionis intends to file for approval this year. FCS is a severe, rare genetic disease estimated to affect about 3,000 – 5,000 people with no effective treatment currently available.

Juno Halts JCAR015 in r/r adult ALL: Juno JUNO, which reported fourth quarter results, said that it will be discontinuing the development of its most advanced pipeline candidate, JCAR015, for relapsed/refractory acute lymphoblastic leukemia (r/r ALL). The company will instead focus on a defined cell product for this setting. JCAR015 ran into trouble last year when higher than expected severe neurotoxicity was observed in a study along with the occurrence of five deaths due to cerebral edema (Read more: Juno Loss Wider; End of Cancer Drug Study Hits Stock). Over the last one year, Juno has underperformed the Zacks-categorized Medical-Biomedical/Genetics industry with shares declining 48% compared to the industry decline of 0.2%.

Celgene Presents Promising Data on Otezla: Celgene CELG presented encouraging results at the annual meeting of the American Academy of Dermatology from its phase IV UNVEIL study on Otezla in patients with moderate plaque psoriasis who were naïve to systemic and biologic therapy. Otezla, which crossed $1 billion in sales in 2016, has immense potential with sales being driven by demand, an expanded U.S. footprint, growing market share and launch in new markets. Celgene is a Zacks Rank #2 (Buy) stock. You can see the complete list of today’s Zacks #1 Rank (Strong Buy) stocks here.

The NASDAQ Biotechnology Index slipped 0.7% over the last five trading sessions with stocks being hit by President Trump’s tweet. Among major biotech stocks, Biogen BIIB was up 0.9% while Gilead (GILD - Free Report) declined 2.1%. Over the last six months, Celgene was up 14.1% while Gilead was down 11.8% (See the last biotech stock roundup here: Kite Soars on CAR-T Data, EXEL in Immuno-Oncology Deals). 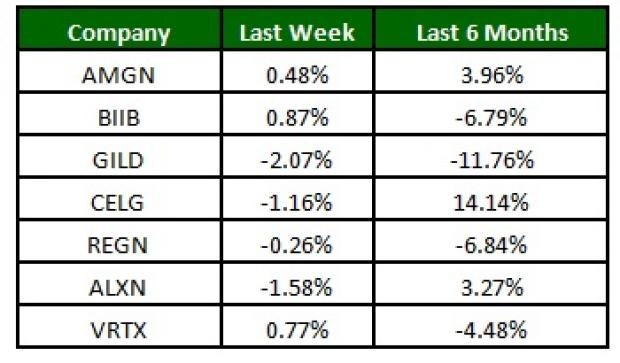