Inside Dollar's Valuation: ETFs in Focus

Although the sooner-than-expected Fed rate hike hearsay continues to hit the headlines, investors haven’t really seen this speculation translate into huge gains for the U.S. dollar, at least not in the recent timeframe. In fact, the greenback — as represented by the U.S. dollar Index — gained just 0.04% in the last five trading sessions and is down 0.6% so far this year (as of March 7, 2017).

The moderate advance in the greenback against other major developed markets’ currencies has been aided by the divergence in monetary policies. While the Fed seems to be hurrying in hiking rates this year, central banks in the Eurozone and Japan are still practicing ultra-easy monetary policies.

This took the greenback to a 14-year high. But can the currency gain more strength ahead after the likely enactment of the third rate hike in a decade next week? Let’s delve a little deeper into the thoughts of renowned analysts.

As per Goldman Sachs, “a March U.S. interest rate hike sets the stage for a 10% rally in the greenback.” According to Goldman, the market may expect four rate hikes in the second half of 2017 for the coming one year, if economic data come in solid.

As per the bank, the greenback normally reacts quickly to Fed policy tightening. Though market watchers have priced in the possibility of a March rate hike quite early this time, “the pricing of the cumulative increase in the federal funds rate over the next 2 years has not changed much, and is still 100 bp[s] below the path of our US economists’ forecast.”’

Inside the Movement of the 2-year Interest Rates

Goldman Sachs has noted that the two-year interest rate differential is most crucial for currency movement. Notably, two-year Treasury bond saw yields touching as high as 3.05% in June 2008, prior to the Lehman Brother collapse in September.

And now that two-year Treasury bond yield is hovering around 1.33%, no can understand how low the two-year U.S. Treasury bond yields presently are from the historical standard and how far it can go if the economy is set right (read: March Rate Hike in the Cards: Bet on These Inverse Treasury ETFs).

As per Goldman’s interest rate differential model (against the USD G-10 trade-weighted index), a 100-bp rise in the two-year USD interest rate reflects about 10% jump in USD appreciation versus G10 currency. Investors should note that “the U.S. two-year yield hit a fresh high going back to 2009” lately reinforcing the aggressive stance expected from the Fed (read: Yellen Gives Hawkish Signals: 5 ETF Plays).

An Opposite View is Also Present

As per UBS, the dollar is currently highly overvalued. It is about 15% stronger than UBS’s fair value of $1.24 per euro and the Wall Street expects the greenback to scale up to $1.05 against the common currency from the current level of $1.06.

However, we would like to note that the Eurozone might see some political upheavals as a host of elections is underway. If anything unusual happens and some ‘Brexit-like’ situations occur, euro may slip and the greenback will gain considerable strength.

Agreed, the U.S. trade deficit balance widened in the month of January as imports surpassed exports in the face a rising greenback. But rapidly increasing odds of faster rate hikes this year are still likely to boost dollar somewhat in the near term.

A Technical Look at UUP

The fund is currently hovering around its 52-week high and might hit another high in the near term. Its short-term moving average is above the long-term average as depicted by the 200-Day SMA in the chart below. This suggests continued bullishness for this ETF.

This is further confirmed by the trend in the Parabolic SAR. The current price of UUP ($26.29) is trading above the parabolic SAR indicating a moderately bullish trend for the product. The fund has a relative strength index of 56.95 meaning it is way behind entering the overbought territory and has some room to run. 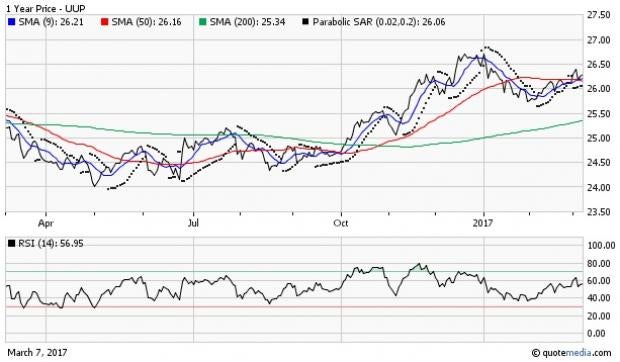