Net sales gained 24.4% year over year to $174.7 million during the fourth quarter. The robust performance of the company is reflected in the price movement. Shares of this apparel retailer gained 13% in the past one year, outperforming the Zacks categorized Textile-Apparel Manufacturing industry’s decline of 25.3%. 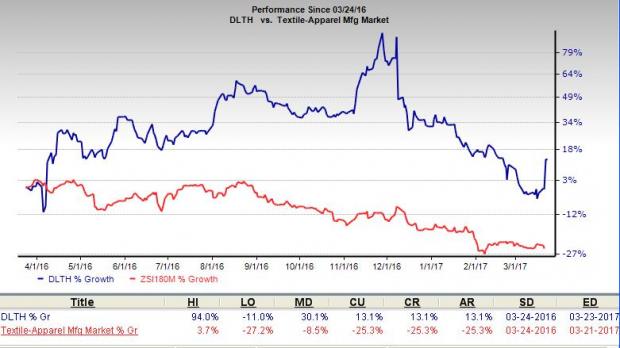 Moreover, revenues beat the consensus mark of $163.0 million by 7%. Although unusually warm weather during the onset of winter marred sales, the mercury drop in the latter part of December revitalized sales in the cold weather product category which aided the sales gain during the quarter.

Gross profit increased 23% to $96.8 million on the back of higher year-over-year sales. Gross margin shrank 70 basis points (bps) to 55.4% in both direct and retail segments due to a highly promotional retail environment during the fourth quarter.

Operating income gained 20.3% to $22.9 million during the quarter due to lower selling, general and administrative expenses.

Earnings of 66 cents declined 38% year over year and was in line with the Zacks Consensus Estimate. Further, it increased 23.7% to $376.1 million compared with $304.2 million in the prior year.

Better-ranked stocks in the broader consumer discretionary sector include:

Hasbro Inc. HAS has an earnings growth rate of 13.6% in the trailing four quarters.

All these stocks carry a Zacks Rank #2 (Buy). You can see the complete list of today’s Zacks #1 Rank (Strong Buy) stocks here.

Zacks has just released a Special Report that spotlights this fast-emerging
phenomenon and 6 tickers for taking advantage of it. If you don't buy now, you may kick yourself in 2020. Click here for the 6 trades >>

Why Should You Buy Apollo Global Management Stock Now?