Inflows into Thailand amounted to $3.42 billion this year, driving the baht to its highest level since mid-2015. Current account surplus was $5.73 billion in February 2017, while foreign exchange reserves rose 5.2% to $181 billion.

The performance of the Thai stock market has been mixed so far this week, with both positive and negative finishes. Thailand denied any practice of currency manipulation to curb some of the gains of the baht, which makes its exports less attractive. Any such thing could place it on U.S. Treasury’s monitoring list, which is due in mid April.

In the current scenario, let’s have a look at the Thailand ETF, THD:

This fund offers exposure to companies based in the nation and is an appropriate bet for investors bullish on Thailand.

We will now compare the performance of THD to a broader South East Asia ETF, ASEA.

This fund provides broad exposure to the five members of the Association of Southeast Asian Nations, Singapore, Indonesia, Malaysia, Thailand, and the Philippines. It is appropriate for investors looking for a diversified exposure to South East Asia (read: Malaysia Inflation at Record High: ETF in Focus). 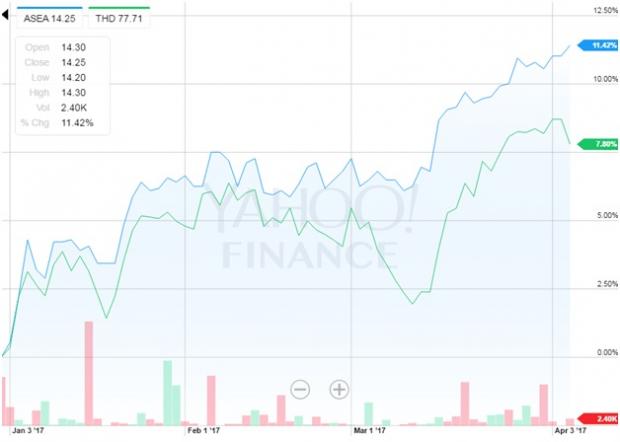 Though the Thailand ETF significantly outperformed ASEA in the past one year, ASEA has been the better performer so far this year. With almost 30% exposure to Singapore, ASEA’s relative underperformance in the past one year was partially due to growth concerns in Singapore, which have since then abated. Given the doubts over policy decisions to be adopted by Thailand, its best to remain on the sidelines for now (read: Investments in Singapore Property Assets Rise: ETF in Focus).