Premium consumer goods company, iRobot Corporation (IRBT - Free Report) recently announced that it has successfully closed the buyout of Sales On Demand Corporation’s (SODC) distribution business in Japan. The company noted that this acquisition would fortify its foothold in the country, the biggest consumer robotics end market outside North America.

iRobot’s stock valued $66.11 at the close of trading on Apr 10, gaining roughly 14.8% since the beginning of this year. However, over the last one year, shares of this Zacks Rank #4 (Sell) stock yielded a return of 13.12%, marginally underperforming 13.39% growth recorded by the Zacks categorized Industrial Automation/Robotics industry. 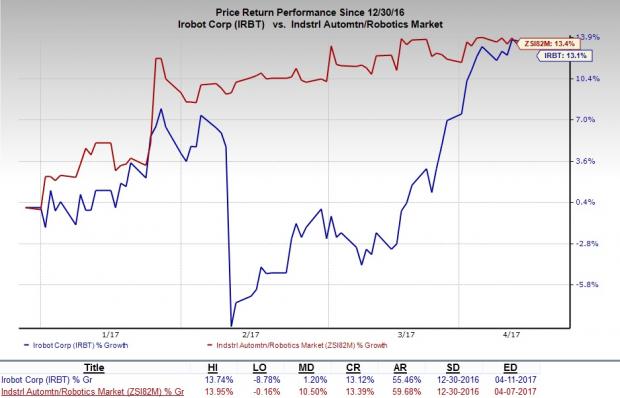 Since 2004, Tokyo-based SODC has been a prominent distribution partner of iRobot and has established its brand as a leading consumer robotics company in Japan.

On Nov 21, 2016, iRobot had declared that it would acquire SODC’s distribution business in Japan. The company finally closed the deal with a preliminary price of roughly $18 million, subject to amendments. The final value of the deal would not be fixed before May 18, 2017.

iRobot announced that Hajime Hikino would take charge as the representative executive officer and president of the newly acquired business. Hikino would look into the regular marketing activities of iRobot Japan.

iRobot believes that it would be directly able to control the different types of post- and pre-sales marketing activities (retail, branding, marketing, customer service and channel relationships) in Japan on the back of this buyout. Notably, the company stated that like 2016, its Japanese business arm would continue to accelerate top-line performance in 2017 and beyond.

Other financial details related to the deal would be revealed during iRobot’s first-quarter 2017 earnings release on Apr 25.

Why a Poor Zacks Rank?

iRobot currently carries an unfavorable Zacks Rank #4. On Apr 4, 2016, iRobot divested its Defense & Security business, in order to become a pure play consumer technology company. However, the post spin-off profit making prospects of the company still remain ambiguous. Additionally, over the last 60 days, the Zacks Consensus Estimate for the stock has been revised downward for both 2017 and 2018, reflecting negative market sentiments.

Some better-ranked stocks worth considering within the industry are listed below:

Brady Corporation (BRC - Free Report) boasts a Zacks Rank #1 and has a positive average earnings surprise of 20.84% for the trailing four quarters.

Avery Dennison Corporation (AVY - Free Report) holds a Zacks Rank #2 (Buy) and generated an average earnings surprise of 6.17% in the past quarters.

Today's investment ideas are short-term, directly based on our proven 1 to 3 month indicator. In addition, I invite you to consider our long-term opportunities. These rare trades look to start fast with strong Zacks Ranks, but carry through with double and triple-digit profit potential. Starting now, you can look inside our home run, value, and stocks under $10 portfolios, plus more. Click here for a peek at this private information >>