Tech Stock Q1 Earnings Slated on May 2: AME, GDDY & Others

The first-quarter earnings season has gathered pace, with results from 288 S&P 500 members or 63.8% of the index’s total market capitalization already out (as of Apr 28).

Per the latest Earnings Preview, total earnings of these index members are up 13.7% year over year on the back of 8.2% higher revenues. Beat ratios are impressive with 76.4% beating earnings estimates and 68.1% coming ahead of revenue expectations.

Investors seem to be rejoicing as most of the companies in the technology sector last week surpassed their estimates, particularly revenue estimates, in the first quarter. Also, growth rate is up from the preceding quarter and is on track to reach its highest level in almost three years. Continuation of these trends through the rest of this earnings season should serve as a reassuring development for the market.

As per the report, 30 of the technology sector’s 62 companies in the S&P 500 index have reported their earnings. Total earnings of these 30 companies, which account for 57.4% of the sector’s total market cap in the index, are up 17.7% from the same period last year on 6.2% higher revenues, with 80% beating earnings estimates and 73.3% surpassing revenue expectations.

Among the technology firms slated to report first-quarter earnings on May 2, let’s see what’s ahead for these five.

According to our model, a company needs to have the right combination of two key ingredients – a positive Earnings ESP and a Zacks Rank #1 (Strong Buy), 2 (Buy) or at least 3 (Hold) – to increase the odds of an earnings surprise.

Our proven model shows that AMETEK is likely to beat the Zacks Consensus Estimate as it has the right combination of a favorable Zacks Rank (Zacks Rank #3 (Hold) or better) and a positive Earnings ESP. You can uncover the best stocks to buy or sell before they’re reported with our Earnings ESP Filter.

The Earnings ESP for AMETEK is +1.79%. This is because the Most Accurate estimate stands at 57 cents while the Zacks Consensus Estimate is pegged at 56 cents. The company has a Zacks Rank #2 (Buy), which increases the predictive power of ESP. Therefore, we are reasonably confident of AMETEK delivering an earnings beat. (Read More: Is a Surprise Coming for AMETEK This Earnings Season?)

Notably, AMETEK’s results surpassed the Zacks Consensus Estimate once and matched estimates thrice in the trailing four quarters. It has an average four-quarter positive surprise of 0.46%.

Similarly, we expect GoDaddy Inc. GDDY, a worldwide online payments system operator, to outperform estimates when it reports first-quarter 2017 results. The company has a Zacks Rank #3 and an Earnings ESP of 125%.

The company is striving to expand internationally by investing in technology, marketing programs and customer care teams. Growing international presence and the shift toward dynamic online presence for small business will likely play an important role going forward.

Notably, GoDaddy’s surprise history is decent as it surpassed estimates in three of the trailing four quarters. It has an average four-quarter positive surprise of 24.59%.

Also, we expect ENDURANCE INTERNATIONAL GROUP HOLDINGS, INC. EIGI, to outperform estimates when it reports first-quarter 2017 results. The company is a provider of cloud-based solutions. Its solutions are designed to help small and medium-sized businesses.

The company carries a Zacks Rank #3 and an Earnings ESP of 125%.This is because the Most Accurate estimate stands at 57 cents while the Zacks Consensus Estimate is pegged at 56 cents.

Notably, ENDURANCE INTERNATIONAL GROUP’s results surpassed the Zacks Consensus Estimate in two of the preceding four quarters, with an average positive surprise of 13.5%. 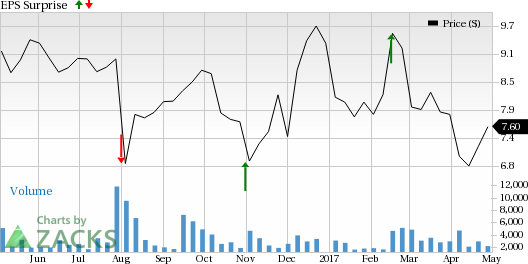 This is because the company has a Zacks Rank #3 but an Earnings ESP of -3.85%. We caution against stocks with a Zacks Rank #4 or 5 (Sell rated) going into an earnings announcement, especially when the company is witnessing negative estimate revisions.

The company’s margins to remain under pressure in the near term, due to continuing investments on new growth avenues like Enterprise Solution portfolio. Also, Akamai anticipates foreign exchange to remain a headwind due to strengthening of the U.S dollar in the first quarter. (Read more: What's in Store for Akamai this Earnings Season?)

However, we note that the surprise history has been decent in Akamai’s case. The company missed estimates just once in the last four quarters. It has an average four-quarter positive surprise of 1.5%.

We also don’t expect Match Group MTCH, the world’s foremost provider of dating products, which holds a portfolio of over 45 brands, to post an earnings beat when it reports first-quarter 2017 results. This is because the company has a Zacks Rank #4 but an Earnings ESP of 0.0%.

Match Group has been making profits over the last three years and has been recording top-line growth as well. The company is currently enjoying strong growth, driven by robust growth momentum at Tinder, solid performances from Meetic and Match and the recently acquired, PlentyOfFish. (Read More: Match Group Q4 Earnings Preview: What to Expect?)

Notably, Match Group’s results surpassed the Zacks Consensus Estimate in three out of the preceding four quarters. It has an average four-quarter positive surprise of 13.17%.You can see the complete list of today’s Zacks #1 Rank  stocks here.

Just released, today's 220 Zacks Rank #5 Strong Sells demand urgent attention. If any are lurking in your portfolio or Watch List, they should be removed immediately. These are sinister companies because many appear to be sound investments. However, from 1988 through 2016, stocks from our Strong Sell list have actually performed 6X worse than the S&P 500.

Can Scripps Networks (SNI) Spring a Surprise in Q1 Earnings?