Should You Buy Brazil ETFs After Brutal Sell-Off?

Political woes are not new to the Brazilian economy, especially when it comes to presidents facing corruption-related allegations. The current President, Michel Temer, has lately been accused of bribing Eduardo, the former speaker of the house, and thus manipulating the corruption probe and last year’s impeachment of former president, Dilma Rousseff. Notably, Rousseff was held responsible for financing government spending illegally.

Following the news of corruption allegations against Temer that in fact triggered the speculation of his impeachment, Brazil’s Bovespa index, registered its worst day on May 18 since October 2008. Brazil ETFiShares MSCI Brazil Capped ETF (EWZ - Free Report) lost about 16.3% on May 18, 2017. However, the fund rebounded about 6.8% the very next day (read: Brazil ETFs Fall as President Temer Faces Corruption Charges).

Brazilian Stocks and Economy So Far This Year

Brazilian stocks and ETFs were on a tear in early 2017. Hopes of new reforms that can shore up the country’s recession-stricken economy after the impeachment of Dilma Rousseff, commodity strength, easing inflationary pressure and the resultant rate cuts perked up Brazil ETFs.

The country slashed interest rates by 25 bps for the first time in four years in mid-October, giving signs of a turnaround in the long-ailing economy (read: Brazil ETFs in Focus as Central Bank Cuts Rates Again).

The Brazilian central bank again cut rates by 25 bps in November, 75 bps in January, another 75 bps in February and 100 bps to 11.25% in April. This gave a boost to consumer confidence in Brazil as low rates provide some relief to debt-ridden families and lift business sentiments.

Should You Use Temer-Turmoil as Buying Opportunity?

While this fast policy-tightening cycle may halt in the coming days, if the Temer turmoil continues longer, one should not forget the brighter side. Brazil is gradually turning into a fintech hub, as per CNBC.

Secondly, the subdued greenback thanks to some weaker-than-expected U.S. economic data and multiple allegations against Trump might favor Brazilian stocks and ETFs. This is because Brazil is a commodity-rich country and a weaker greenback will help commodity prices hold ground. Some analysts believe that “the recent shake up would likely dissipate, creating value in the long term.”

Whatever be the case, political uncertainty will keep Brazilian index highly volatile in the coming days.iShares MSCI Brazil Small-Cap ETF EWZS may suffer more than EWZ as small-cap stocks are tied more to the developments in the domestic economy (see all Latin American Equity ETFs here).

“With future leadership prospects in Brazil now significantly more uncertain, the outlook for fiscal reform and budget consolidation has deteriorated,” as per a currency analyst at Wells Fargo Securities.

Still, investors with a strong stomach for risks, can play EWZ which is about to enter an oversold territory as indicated by the relative strength index of 38.31. The short-term moving average (9-day) for EWZ is above the mid-term average (50-day) and long-term average (200-day), suggesting bullishness. 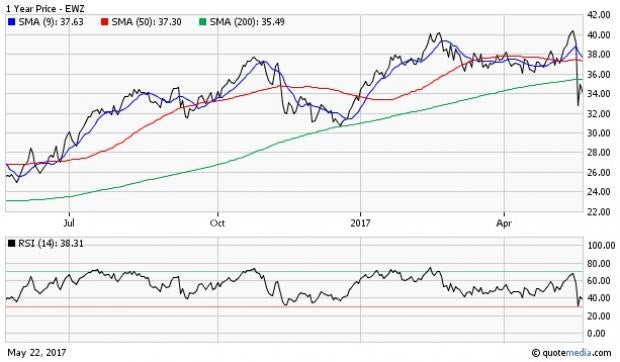