The Central Bank of Chile kept its benchmark interest rate unchanged at 2.5% on June 15, 2017. The decision was quite expected by the markets.

It last lowered the benchmark rate by 25 basis points in May 2017. The Central Bank has slashed rates by 100 basis points so far this year. However, the bank provided no guidance on further rate cuts.

Chile’s consumer prices rose by 2.6% year over year in May 2017 compared with 2.7% increase in April. The Central Bank stated that inflation expectations are in line with its 3% target rate.

Another major development in the country’s banking system is the new bill on Basel III reforms. The country’s government has sent a bill to the Congress urging banks to adopt the Basel III accord. It is expected to safeguard banking operations by following standardized measures in order to help integrate the country’s financial systems with the global financial system.

Let us now discuss the most popular ETF focused on providing exposure to Chile (see all Latin American ETFs here).

Below is a chart comparing the year-to-date performance of the two funds. 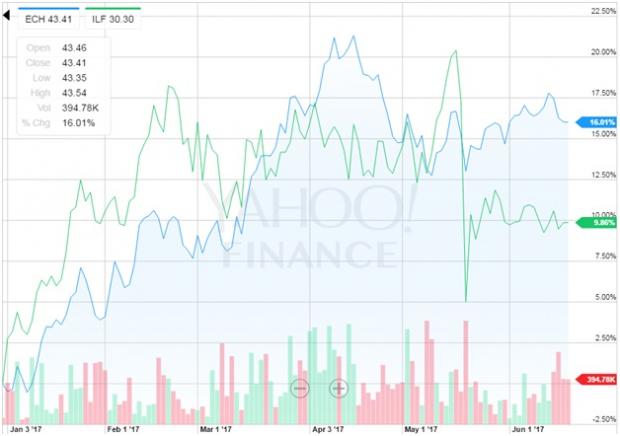