The Cato Corporation CATO continues to disappoint investors with its dismal comparable-store sales (comps) trend for more than a year, mainly due to a tough retail landscape. In fact, the trend entered the month of July as well, for which the company released dismal sales metrics.

Cato's July comps dropped 9% year over year, followed by the declines of 16%, 16%, 2%, 21%, 25% and 15% in the months of June, May, April, March, February and January, respectively. Furthermore, comps for the first half fell 15% from the prior-year period. Below is the trend of comps for the last seven months: 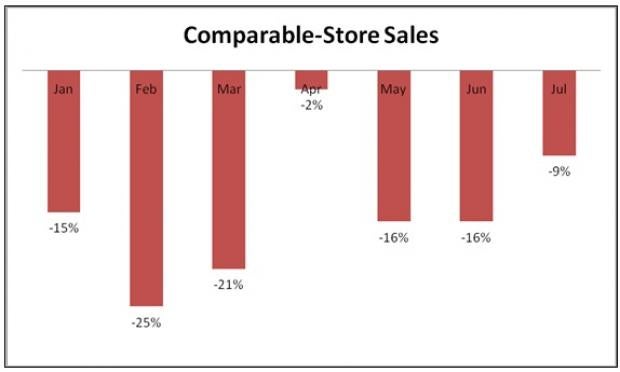 We note that the dismal sales trend has been pressurizing the company’s merchandise margins and in turn, adversely impacting the overall profitability. Evidently, management anticipates loss in the second quarter, which it schedules to report on Aug 17. In addition, the company projects its 2017 earnings to be significantly down from 2016.

In fact, these factors are well reflected in Cato’s stock price performance. The company’s shares have plunged over 53% in the last one year, wider than its industry’s decline of 29.8%. Currently, the industry is placed at the bottom 36% of the Zacks classified industries (163 out of 256).

Retail-Wholesale sector is currently placed at the bottom 6% of the Zacks classified sectors (15 out of 16). Over the last three months, the sector has gained 3.3%, in line with the S&P 500 index’s growth. Currently, the sector is grappling with soft mall traffic, volatile consumer spending and macroeconomic volatility.

Consequently, retailers are now focusing more on enhancing their omni-channel capabilities, optimizing store fleet and restructuring activities to counter these headwinds. Evidently, Cato inaugurated one store in Greensboro, NC and shuttered one store in the month under review. This brings the total store count to 1,374 as of Jul 29, 2017. Prior to this, it also opened one store in Lake City, FL in June.

Apart from Cato, retailers like L Brands, Inc. LB has also fallen prey to the retail industry’s headwinds and reported comps decline of 7% in July. However, there are retailers that have managed to stay afloat in the current circumstances, and delivered positive comps. Zumiez Inc. ZUMZ and Costco Wholesale Corporation (COST - Free Report) recorded comps growth of 5.1% and 6.2%, respectively, for the month of July.