Developer Sledgehammer Games revealed that the beta version will deliver only a part of the full multiplayer experience as it plans to implement the feedback in the final game, which is set to release on Nov 3. The company seems to keep the interest of fans brewing by keeping out the brand new Headquarters social space from the beta version.

Call of Duty is one of the most important revenue generators for the company. It has always lifted investors’ sentiment and raised expectations for future titles. The company has witnessed strong growth across all the Call of Duty franchises, except the Infinite Warfare title, which recorded relatively lower sales.

Notably, last year, the company’s shares were up following the Call of Duty XP event. Earlier, in 2015, Call of Duty: Black Ops 3 earned over $550 million, globally, in its opening weekend.

We believe the new title will help to sustain the momentum in Activision’s shares, which have gained 73.8% year to date, significantly outperforming the industry’s 46.7% rally. 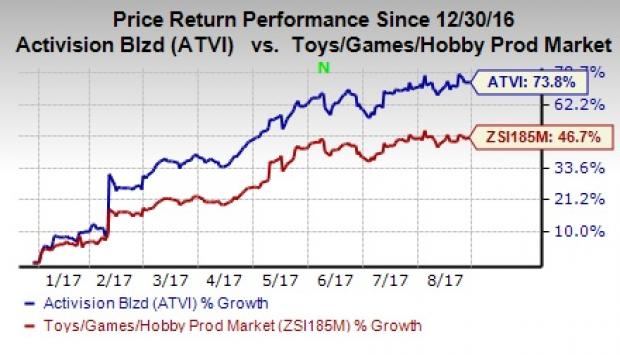 Activision’s expanding franchise portfolio that includes offerings like StarCraft, World of Warcraft, Diablo, Hearthstone and Heroes of the Storm will drive growth in the long haul. Notably, the company is also set to launch Destiny 2 on Sep 6, ahead of the holiday season. We believe along with Call of Duty: WWII, Destiny 2 will also be a big revenue driver going ahead.

Activision faces severe competition from its peers like Electronic Arts (EA - Free Report) and Take-Two Interactive Software Inc. (TTWO - Free Report) who are stepping up their efforts to gear up for the holiday season. The holiday season is the most important time of the year for video game stocks. Most of the companies generate maximum sales during this time of the year. They go by the idea of ‘saving the best for the last’ and release their most important titles during the holiday season.

Take Two, one of the leading names in the video game publishing arena, is driven by its well-known franchises like GTA and NBA2K as well as other franchises like WWE 2K, Mafia, Sid Meir’s Civilisation, BioShock, Battleborn, Max Payne and Red Dead. Reportedly, it is launching the new NBA 2K18 in Sep 2017 and WWE 2K18 on Oct 17.

EA’s popularity is driven by franchises like EA SPORTS titles, along with Battlefield, Titanfall and Star Wars. It also has a strong pipeline of new launches, which includes the sequel of the immensely popular action packed game Star Wars Battlefront to be released worldwide on Nov 17.

Since 1988, the Zacks system has more than doubled the S&P 500 with an average gain of +25% per year. With compounding, rebalancing, and exclusive of fees, it can turn thousands into millions of dollars.

But here's something even more remarkable: You can master this proven system without going to a single class or seminar. And then you can apply it to your portfolio in as little as 10 minutes a month.