On Oct 11, we issued an updated research report on New York-based DENTSPLY SIRONA Inc. XRAY — a global leader in the design, development, manufacture and marketing of dental consumables and dental laboratory products.

We feel that the deal extension is a smart move by DENTSPLY as the preexisting agreement did not include the CEREC CAD/CAM restoration system and the Schick line of imaging sensors. By including the aforementioned lines of products, the company will benefit from Henry Schein’s distribution network in Canada.

Among the recent developments, DENTSPLY announced the renewal of its partnership with Pacific Dental Services. The duo’s latest agreement extends for a period of five years which was signed in 2012.
This move is also a strategic one as Pacific Dental’s network consists of over 580 centers across 17 states. During the tenure of the present agreement, management expects the number of such offices utilizing DENTSPLY technologies to exceed 800.

On the flip side, apart from a series of macroeconomic headwinds, currency fluctuation continues to be a major dampener. In fact, strengthening of the U.S. dollar against Euro and other emerging market currencies has dented the company’s growth trajectory. Furthermore, higher capital expenditure on product development is expected to keep margins under pressure.

DENTSPLY's estimate revision trend looks unfavorable at the moment. For the third quarter, two analysts moved south, compared to no upward revision in the last two months. Notably, the current quarter estimates dropped 1.5% to 67 cents per share over the last 60 days.

DENTSPLY’s share price movement has been unfavorable over the last three months. The company shed 11.7%, much higher than the industry’s decline of 4.4%. 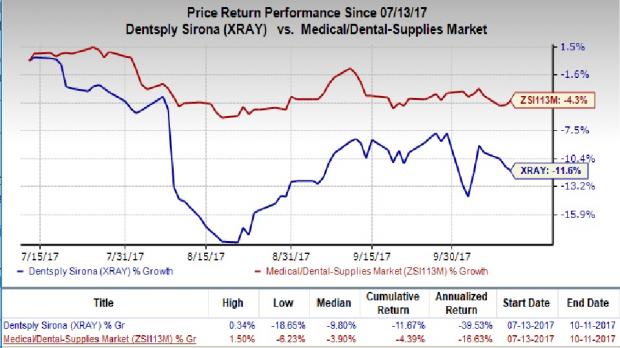 Abbott has a long-term expected earnings growth rate of 10.7%. The stock has rallied roughly 35.2% over a year.

IDEXX Laboratories has a long-term expected earnings growth rate of 19.8%. The stock has gained 40.8% over a year.

Thermo Fisher has a long-term expected earnings growth rate of 11.7%. The stock has gained 25.3% last year.