Pipeline and regulatory updates were the focus this week with the FDA approving the first two-drug HIV treatment in the United States and the European Commission (“EC”) granting approval to Johnson & Johnson’s (JNJ - Free Report) Tremfya and expanding the label of Novartis’s (NVS - Free Report) Tasigna.

Juluca marks the beginning of a new era in HIV treatment with other companies like Gilead also working on bringing better treatments to the market (Read more: J&J & Glaxo Get FDA Approval for First Two-Drug HIV Regimen).
.
EU Nod for J&J Psoriasis Drug: Janssen-Cilag International NV, a J&J company, gained EU approval for its psoriasis drug, Tremfya, for use in adults with moderate-to-severe plaque psoriasis who are candidates for systemic therapy. Approval was expected considering the Committee for Medicinal Products for Human Use (“CHMP”) had adopted a positive opinion in September. The drug was approved in the United States earlier this year in July.

Although the psoriasis market is pretty crowded, about 125 million people across the world are estimated to suffer from psoriasis including 14 million Europeans. 20% of these cases are considered moderate to severe. Tremfya is currently in late-stage development for the treatment of psoriatic arthritis.

Roche Presents Data on Hemophilia and Cancer Drugs: Roche (RHHBY - Free Report) presented positive data on its recently approved hemophilia drug, Hemlibra, from a late-stage study (HAVEN 3) in adults and adolescents (aged 12 years or older) with hemophilia A without inhibitors to factor VIII. The study met its primary endpoint as well as key secondary endpoints with Hemlibra significantly reducing bleeds.

Roche also presented positive data on a combination of its two cancer drugs, Tecentriq and Avastin, in patients with a type of advanced lung cancer. The drugs plus chemotherapy were found to significantly cut down the risk of disease worsening or death in the first-line treatment of these patients. Roche intends to submit this data to the FDA as well as other regulatory agencies. Although the data is not fully mature, Roche said that initial observations show encouraging overall survival (“OS”) data. The next OS analysis is scheduled for the first half of 2018 (Read more: Roche Reports Positive Data From Tecentriq Combination Study).

Label Expansion for Novartis Cancer Drug: The EC has expanded the label of Novartis’s tyrosine kinase inhibitor (“TKI”), Tasigna (nilotinib), so that it can be used for the treatment of pediatric patients with newly diagnosed Philadelphia chromosome-positive chronic myeloid leukemia in the chronic phase (Ph+ CML-CP) and pediatric patients with Ph+ CML-CP with resistance or intolerance to prior therapy including Gleevec (imatinib). Approval for this indication was expected given a positive CHMP opinion issued in September. With treatment options being limited for children with CML, there is significant unmet need in this patient population (Read more: Novartis Receives EC Nod for Tasigna Label Expansion).

J&J Seeks Label Expansion for Darzalex: J&J’s Janssen-Cilag International NV is looking to expand the label of its immunotherapy Darzalex so that it can be used in combination with Velcade (bortezomib), melphalan and prednisone for the treatment of adult patients with newly diagnosed multiple myeloma who are ineligible for autologous stem cell transplant. Approval would expand the patient population significantly. Regulatory applications have been submitted in the United States as well as the EU. FDA approval would make this the fifth indication for Darzalex in the United States and the first in the frontline setting (Read more: J&J Seeks Darzalex's Label Expansion in First-Line Setting). 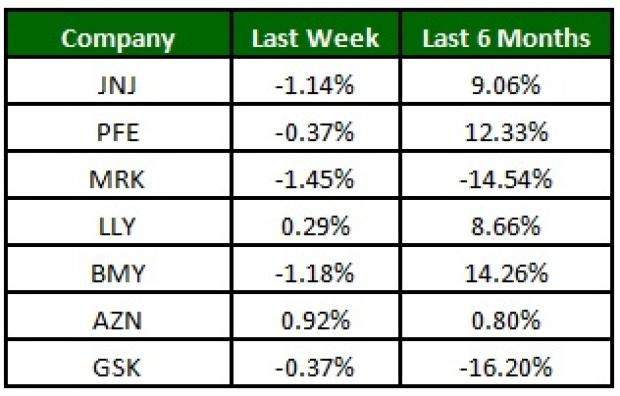 Watch out for regulatory and pipeline news from pharma stocks.

Can Disney's (DIS) Studio Segment Make a Turnaround in FY18?