5 Reasons to Add Westlake Chemical to Your Portfolio Now

Westlake Chemical Corporation (WLK - Free Report) stock looks promising at the moment. The chemical maker has seen its shares rally roughly 68% year to date. We are positive on the company’s prospects and believe that the time is right for you to add the stock to portfolio as it looks promising and is poised to carry the momentum ahead.

What’s Working in Favor of Westlake?

An Outperformer: Westlake Chemical has outperformed the industry it belongs to over a year. The company’s shares have shot up around 73.2% over this period, compared with roughly 24.7% gain recorded by the industry. The company is benefiting from healthy demand for olefins and vinyls products and the Axiall acquisition. 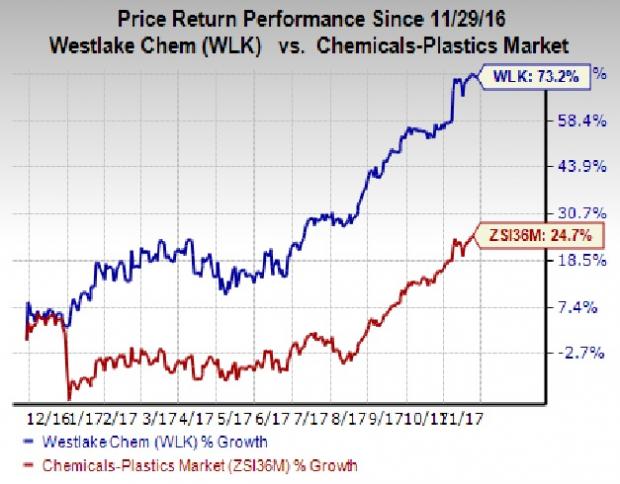 Positive Earnings Surprise History: Westlake Chemical has an impressive earnings surprise history. The company has outpaced the Zacks Consensus Estimate in each of the trailing four quarters, delivering a positive average earnings surprise of 23.5%.

Healthy Growth Prospects: The Zacks Consensus Estimate for earnings for 2017 is currently pegged at $5.02, reflecting an expected year-over-year growth of 29.7%. The stock also has a long-term (three to five years) expected earnings per share growth rate of around 10.6%, just above the industry average of 10%.

Upbeat Q3 & Outlook: Westlake Chemical logged a net income of $210.8 million or $1.61 per share for the third quarter, a more than three-fold surge from $65.7 million or 51 cents a year ago. Barring one-time items, earnings for the reported quarter were $1.65 per share, which topped the Zacks Consensus Estimate of $1.39.

Westlake Chemical, in its third-quarter call, said that its results benefited from increased demand for all major products in both Vinyls and Olefins segments along with higher prices in the Vinyls segment. The company sees increased ethylene availability with the start-up of new ethylene plants and completion of capacity expansions.

The company believes that the Axiall buyout and continued investments to improve the reliability and operational efficiency of its assets will enable it to fully leverage the improving Vinyls market. It also sees favorable demand trends for all of its major products to continue moving ahead.

Westlake Chemical should continue to benefit from the Axiall acquisition. The acquisition has diversified the company’s product portfolio and geographical operations, creating a North American leader in Olefins and Vinyls. The company is on track to realize around $120 million in synergies and cost savings related to the acquisition in 2017.

Ingevity has an expected long-term earnings growth of 12%. The stock has gained around 39% year to date.

Kraton has an expected earnings growth of 25.4% for the current year. Its shares are up roughly 71% year to date.

Kronos has an expected long-term earnings growth of 5%. Its shares are up roughly 143% year to date.