5 Reasons to Add Kraton Corp (KRA) Stock to Your Portfolio

Kraton Corporation’s (KRA - Free Report) stock looks promising at the moment. The chemical maker has seen its shares shoot up roughly 43% over the past three months. We are positive on the company’s prospects and believe that the time is right for you to add the stock to portfolio as it looks promising and is poised to carry the momentum ahead.

What’s Working in Favor of Kraton?

An Outperformer: Kraton has outperformed the industry it belongs to year to date. The company’s shares have rallied around 63.2% over this period, compared with roughly 9.2% gain recorded by the industry. 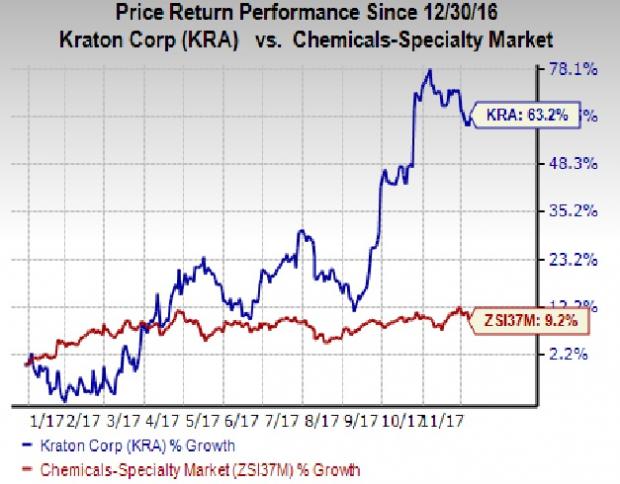 Attractive Valuation: Going by the EV/EBITDA (Enterprise Value/ Earnings before Interest, Tax, Depreciation and Amortization) multiple, which is often used to value chemical stocks, Kraton is currently trading at trailing 12-month EV/EBITDA multiple of 7.5, cheaper compared with the industry average of 23.8.

Healthy Growth Prospects: The Zacks Consensus Estimate for earnings for 2017 for Kraton is currently pegged at $2.96 per share, reflecting an expected year-over-year growth of 25.4%. Moreover, earnings are expected to register a 30.6% growth in 2018.

Growth Drivers in Place: Kraton is benefiting from the acquisition of Arizona Chemical in the form of cost reduction and operational improvements. The company delivered cost improvement and transaction synergies worth $10.7 million in the third quarter of 2017.

Kraton also realized operational cost improvement and transaction synergies related to the Arizona Chemical acquisition of $65 million at the end of September 2017, well ahead of its initial year-end 2018 target. The company also expects to realize roughly $50 million of its $70 million cost reduction target for its Polymer segment by end-2017 with the balance is anticipated to be realized in 2018.

Moreover, Kraton remains committed to steer organic growth in key markets through state-of-the-art innovation and infrastructure. The company, in May, announced the opening of a hydrogenated styrenic block copolymer (HSBC) plant in Mailiao, Taiwan. The plant will boost the company’s innovation-grade business, especially low molecular weight HSBC products. It will also help Kraton to effectively serve the growing export and Asian markets through higher production capacity of varied grades of HSBC products.

Koppers has an expected long-term earnings growth of 18%. The stock has gained around 23% year to date.

Kronos has an expected long-term earnings growth of 5%. The stock has gained around 112% year to date.

Westlake Chemical has an expected earnings growth of 10.6% for the current year. Its shares are up roughly 76% year to date.