What Lies Ahead for Brazil ETFs?

In 2017, Brazil’s registered its lowest inflation rate since 1998. Although it surpassed forecasts, it missed the official target range of the Brazilian central bank, leading analysts to believe that the central bank will keep interest rates at an all-time low.

More to the Headlines

Brazilian benchmark IPCA consumer price index increased 2.95% in 2017, the lowest level since 1998. Although it beat Reuters’ forecast of 2.8%, it missed the central bank’s target range of 3-6%. However, the monthly increase in consumer prices in December was impressive, as it increased 0.44% compared with a Reuters forecast of 0.3%.

The increase in consumer prices was driven primarily by higher food prices, as it increased 0.54% in December compared with a contraction of 0.38% in November.

Moreover, policymakers cut the benchmark interest rate to a record low of 7% in their December monetary policy meeting. Interest rate futures data forecast a further cut to the benchmark Selic rate by 25 basis points in February.

Coming to structural reforms, the lower house of Congress delayed a vote on trimming social security until February. Brazilian president Michel Temer expected a vote by late December, but lack of adequate support for the pension cuts lead to the delay. The bill’s primary policies revolve around increasing the retirement age and decreasing generous pensions for public sector employees.

Brazil’s economy has been recovering from a terrible recession, with two consecutive years of negative growth. The economy contracted 3.8% and 3.6% in 2015 and 2016, respectively. Investors are worried about the passage of Temer’s reform in an election year, as a failure for this reform will weigh on Brazil’s efforts toward reducing the increasing public debt and weakening the economy’s recovery. “Even though 2018 is an election year, the fiscal crisis is so big that it will be possible to get pension reform approved,” Speaker Rodrigo Maia said.

Below is a chart, comparing the one-year performance of the two funds. 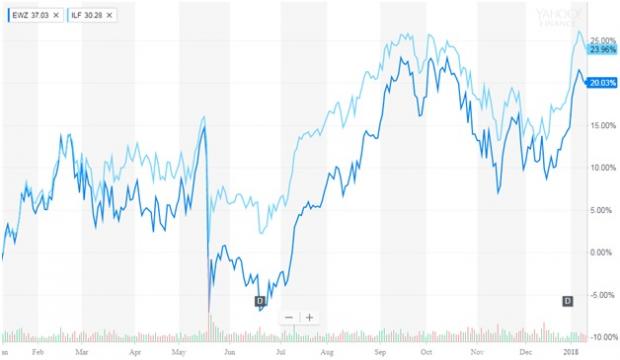 3 Reasons to Play Small-Cap Value ETFs over Growth Ones