Amazon.com Inc. (AMZN - Free Report) is going great guns with global expansion of its media services. Recently, the company announced that it’ll begin pushing Amazon Music service to Australia and New Zealand from Feb 1. The new subscribers will get a 90-day free trial and it will be available on all widely used platforms. The service will be later charged $5 a month.

Also, Amazon announced that it has started accepting pre-orders in Australia for Amazon Echo, Echo Dot and Echo Plus devices for $149 AUD, $220 AUD and $79 AUD, respectively. To attract customers, the company has also discounted all three devices by $30 AUD for a limited period. The shipment of these devices will begin early next month.

The smart speakers will come with a regional version of Alexa, featuring Australian and New Zealand accent. This along with local knowledge offerings and skills were created by developers in the region. 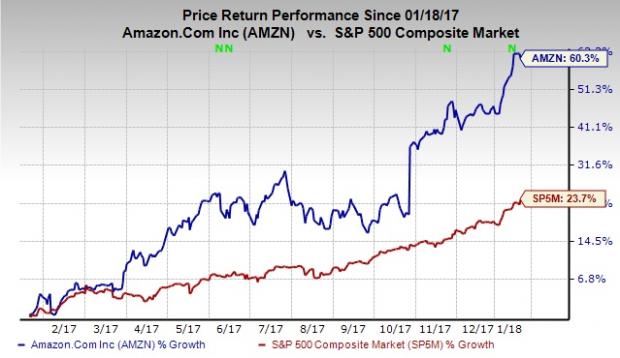 Apparently, Amazon has been putting in a lot of effort to search for new markets for its Alexa powered devices and its services like Music and Prime. The rate at which the company is penetrating new markets makes us optimistic. In December, the company had announced that it’s expanding in 28 new countries.

This growing presence will help Amazon maintain its dominance in the smart speakers market. It already holds almost 70% share in the market, per eMarketer.

Amazon Alexa powered Echo devices have been one its best performing products so far, evident from their performance in the holiday season. Per the company’s statement, Echo Dot was the top-selling product on Amazon.com during the holiday season. Also, Per TechCrunch, which quoted Voicebot, it is estimated that Amazon sold more than 20 million Alexa devices and 1 million non-Echo smart speakers with Alexa built-in through the third quarter of 2017.

These devices support Amazon’s bottom line even after sale by complementing Amazon’s other services. Per Cowen & Co. consumer tracking survey, 84% of the Echo users in the United States use it for listening to music.  Expanding in new countries will help in increasing its Music Unlimited user base. Consequently, its recurring revenue base will improve.

Moreover, we believe that the expansion will not only help Amazon to sell products in these countries  but also help it to get a lot of user data that it can utilize to provide more customer-oriented services in these countries. This will bode well for the company’s top line in the long haul.

Broadcom, Analog Devices and Mellanox have a long-term expected earnings growth rate of 13.75%, 10.40% and 16%, respectively.

In addition to the stocks discussed above, would you like to know about our 10 finest buy-and-hold tickers for the entirety of 2018?

Last year's 2017 Zacks Top 10 Stocks portfolio produced double-digit winners, including FMC Corp. and VMware which racked up stellar gains of +67.9% and +61%. Now a brand-new portfolio has been handpicked from over 4,000 companies covered by the Zacks Rank. Don’t miss your chance to get in on these long-term buys.

Ride the Momentum With These 4 Hot Stocks