3 Reasons Why Investors Should Avoid Hasbro (HAS) Stock

Hasbro, Inc. HAS stock has been losing sheen of late. Further, the company carries a Zacks Rank #4 (Sell). Let’s take a look at some of the factors that are weighing on the stock.

A look at Hasbro’s price trend reveals that the stock has witnessed an unimpressive run on the bourses in the past six months. Shares of the company have lost 13.4% against the industry’s gain of 8% in the same time frame. This reflects investors’ pessimism on the stock, given an uncertain sales environment and rising expenses. 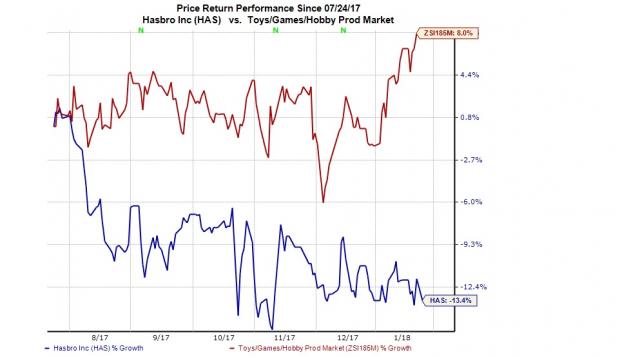 The recent Toys ‘R’ Us bankruptcy came as a blow to Hasbro’s top line. The company saw a decline in third-quarter 2017 revenues. Taking into account the adverse impacts that are expected to continue, the company has revised its fourth-quarter revenue growth guidance in the range of 4% to 7%, lower than its earlier projections.

Consumer spending uncertainty continues in the United States as customers are restraining their non-essential purchases. Despite moderate improvement in economic growth, consumers are increasing their spending only modestly as an increase in jobs this year is yet to translate into significantly higher wages.

Higher health care costs and still-tightened credit availability continue to hurt consumer discretionary spending. As a result, Americans are unwilling to spend much on dispensable items, thereby pulling down the company’s sales.

Meanwhile, mostly weak performance in Latin American markets like Brazil due to a challenging macroeconomic environment along with ongoing softness in the United Kingdom remains a concern. This may continue to hurt revenues in the near term.