Adjusted earnings of 96 cents per share surpassed the Zacks Consensus Estimate of 80 cents. Further, earnings increased 21.5% year over year. The shift to refranchising substantially boosted the company’s operating margin and earnings per share and the trend is expected to continue.

Total revenues of $1.58 billion were down 16.4% year over year and missed the Zacks Consensus Estimate of 1.61 billion. The decline in total revenues was mainly due to decrease in company sales as an impact of its continued strategic refranchising initiative. The reduction in ownership through refranchising is an overhang on near-term revenues.

Just before the earnings announcement, Yum! Brands announced a partnership with online food delivery platform Grubhub to enhance online sales and delivery from its restaurants. As part of the deal, Yum! Brands will acquire $200 million of Grubhub stock. The proceeds will be used by Grubhub to speed up expansion of its delivery capacity.

Shares of Yum! Brands have gained 6.3% over the past year, outperforming the industry’s 3.9% rally. 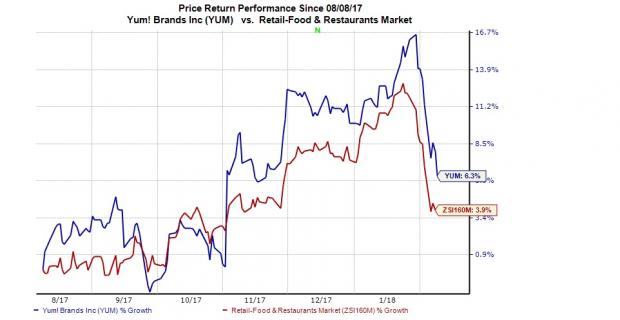 KFC revenues were $814 million, down 11.8% on a year-over-year basis. Comps at the KFC division increased 3% compared with the year-ago quarter’s rise of 2% and the previous quarter’s increase of 4%.

Segment operating margin was up 6% year over year owing to refranchising and same-store sales growth.

At Pizza Hut, revenues were $234 million, down 24.3% on a year-over-year basis. Comps were up 1% against the year-ago quarter’s decline of 3% and preceding quarter’s increase of 1%.

Segment operating margin was up 2.9% year over year, attributable to refranchising, offset by higher franchise and license costs.

Segment operating margin was up 3.8% year over year, attributable to refranchising and same-store sales growth.

Dunkin' Brands DNKN fourth-quarter 2017 adjusted earnings of 64 cents per share beat the Zacks Consensus Estimate of 63 cents.  Earnings, however, stayed flat year over year, as a decline in adjusted net income was offset by decline in shares outstanding.