Adjusted earnings per share of 54 cents outpaced the Zacks Consensus Estimate by 10 cents but decreased 22.9% year over year. Nonetheless, the bottom line came well ahead of the guided range of 41-45 cents. Total revenues of $2.28 billion also surpassed the consensus mark by $20 million and were up 23.9% from the year-ago quarter.

Shares barely moved in the after-hours trading.  However, in the last twelve months, the stock has rallied a whopping 45.1% outperforming the industry’s 36.3% gain. 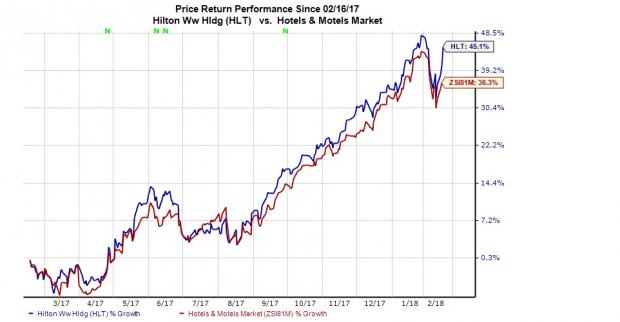 Moreover, the company’s newest brands Canopy, Curio — A Collection, Home2 Suites, Tapestry Collection and Tru together contributed 20% to the room openings in 2017.

We note that improving economic indicators have been a blessing for the hotel industry as these have perked up leisure and business travel demand. Under such circumstances, aggressive expansion strategies, industry-leading loyalty program coupled with an asset-light business model bode well for Hilton.

Let’s check out some other details.

In the quarter under review, system-wide comparable revenue per available room (RevPAR) increased 3.8% (on a currency-neutral basis) higher than the guided range of 1% to 3%. The improvement was driven by growth in occupancy and average daily rate (ADR). Strength at the company’s international hotels also contributed to the increase.

For the first quarter of 2018, adjusted earnings per share are anticipated to lie between 43 cents and 47 cents. The Zacks Consensus Estimate is pegged at 48 cents. Hilton projects system-wide RevPAR to witness a year-over-year increase of 1% to 3% on a comparable and currency-neutral basis. Adjusted EBITDA is envisioned in the $410-$430 million band. Also, the company expects management and franchise fee revenues to increase in the band of 8-10% year over year.

For 2018, adjusted earnings per share are projected within $2.49-$2.60 cents. The Zacks Consensus Estimate is pegged at $2.52. System-wide RevPAR is anticipated to witness a year-over-year improvement of 1% to 3% on a comparable and currency-neutral basis. Meanwhile, adjusted EBITDA is expected in the range of $2.03-$2.08 billion, increasing at 6-9%.

Also, the company management and franchise fee revenues to increase in the band of 8-10% year over year. Net unit growth is anticipated to be approximately 6.5%.

Other top-ranked stocks in the hotel space include Choice Hotels CHH sporting a Zacks Rank #1 (Strong Buy) as well as Intercontinental Hotels IHG and Marriott (MAR - Free Report) , each carrying a Zacks Rank #2. You can see the complete list of today’s Zacks #1 Rank stocks here.

Choice Hotels, Intercontinental Hotels and Marriott’s earnings for 2018 are projected to increase 20%, 30% and 21.6%, respectively.