This week I discuss Microsoft (MSFT - Free Report) , and Lockheed Martin (LMT - Free Report) both of which have recently received positive long term growth catalyst news.  While each has done well as of late, these new drivers are expected to influence both top and bottom line expectations for the next several years.

A recent Morgan Stanley note stated that Microsoft (MSFT - Free Report) is on the way to becoming a $1 trillion market cap company.  The biggest reason for this lofty expectation is how well the company is positioned to take advantage of the cloud.

The combination of Microsoft’s current distribution channels, customer base and core infrastructure services are the keystones for its long term growth in cloud services.  Further, public cloud adaptation is expected to more than double, from 21% to 44%, over the next three years.  The public cloud market is also expected to double in size to over $250 billion.

Both Azure and O365 will be the backbones for this cloud adaptation, and long term growth.  Azure is a set of cloud services that IT and developers use to build and manage applications through Microsoft’s datacenters.  O365 (Office 365) is a subscription plan to access Office applications and other productivity services utilized in cloud services.  Each product is helping users transition personal and business tools to the cloud.

While this overall transition to the cloud will help the top and bottom lines, it is also expected to improve overall margins as well. The company is also focused on cost management, and the shift to the cloud is anticipated to lower operating expenses in both the near and long term.

There is another growth driver that some have kind of forgot about, and that is the acquisition of LinkedIn.  Management recently commented that this segment has been performing better than previously expected as it is now growing much faster than before.  As LinkedIn becomes more integrated into the Microsoft, it is expected to push overall top line growth above 10% (when combined with Azure/O365).

All of this positive news has caused both earnings and revenue estimates to move upwards.  Below are the Sales, and Earnings estimates, for the next two quarters, and two years. 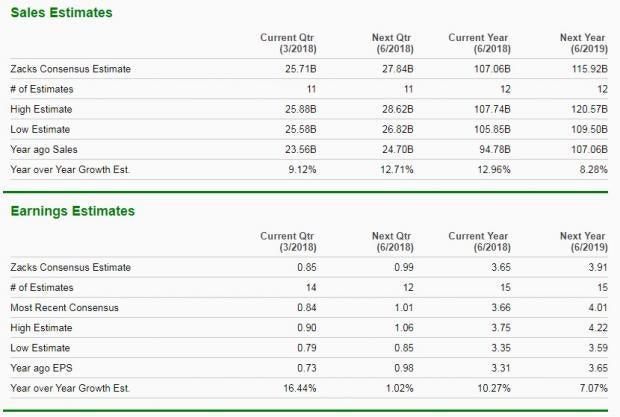 As you can see in the tables the company is expected to see double digit earnings and revenue growth in 2018.  At the same time MSFT pays a solid +1.88% annual dividend.  So as the company is growing they also pay a solid dividend too.

Lockheed Martin (LMT - Free Report) also received some very positive news as of late.  The biggest news item was the passage of the $1.3 trillion spending bill.  Of this $1.3 trillion, about $700 billion is going towards the defense budget.  Also, the President recently appointed John Bolton as National Security Advisor.  Mr. Bolton is considered hawkish on both defense and defense spending.  This is great news for defense contractors.

Also, in the month of March (much before the spending bill was passed) LMT won just under $7 billion in defense contracts.  Several of these contracts extend through 2020, providing a steady stream of revenues over the time period.

The combination of the defense spending, the appointment of Mr. Bolton, and its ability to consistently win defense contracts has caused the stock price to perform well as of late.

As you can see in the Price and Earnings consensus graph below, LMT has been a strong performer for the past several years. The company has also seen consistent increases in annual earnings estimates since 2014.

Outside of the upside for LMT over the next two years, the company also pays an annual dividend yield of +2.44%.