The terms of the deal have been kept under the wraps and are subject to necessary U.S. and German regulatory approvals, with the acquiree being the American subsidiary of German module manufacturer SolarWorld.

Through this buyout, SunPower aims to ramp up production of its advanced P-Series solar panels by investing into the SolarWorld Americas facility.

Per the terms, SunPower will continue to produce and ship SolarWorld Americas' legacy products. Moreover, a portion of the facility will be retrofitted wherein SunPower will manufacture P-Series solar panels. To support this, the acquirer will spend substantially on factory improvements and working capital limits enhancements.

To capitalize on the rising demand for U.S. solar installations, SunPower aims to expand SolarWorld Americas’ operations, following the completion of the deal.

Solar energy has emerged as one of the most popular and reasonable renewable resources owing to its easy availability and declining price of solar panels. Per an U.S. Energy Information Administration (“EIA”) report, total installed U.S. solar PV capacity is expected to more than double over the next five years and more than 15 GW of PV capacity will be installed annually by 2023. Such projections must have driven SunPower to make this latest buyout agreement to expand its footprint in the U.S. solar industry.

In December 2017, a Republican tax bill was released that preserved key tax credits from the federal spending bill of December 2015, feared of being abolished by the Trump administration. Notably this preservation allowed solar power companies, like SunPower to keep claiming federal investment tax credits at 30% of the price of solar energy systems installed by businesses or homeowners.

Moreover, the growing viability of storage solutions like large-scale batteries will also support the expansion of solar power installations in spite of the solar power industry's growth prospects getting dimmed, following President Donald Trump's decision to slap 30% tariffs on imports of solar modules.

In fact, given this current scenario, the recent buyout deal seems to be a strategic step taken by SunPower, as the takeover will not only reduce its reliance on import of solar modules and panels, but also give the company an access to the huge number of panels and modules manufactured by SolarWorld Americas.

Shares of SunPower have rallied 45.2 % year to date, underperforming the industry’s gain of 86.8%. The underperformance may have been caused by stiff competition from cheaper alternatives like natural gas, given the current shale boom in the United States. 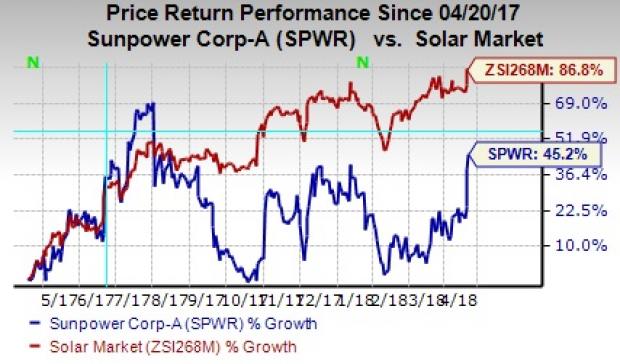 Consol Energy recorded an average positive earnings surprise of 68.25% in the last four quarters. The Zacks Consensus Estimate for 2018 earnings has risen by 19 cents to $3.55 in the last 60 days.

SolarEdge Technologies recorded an average positive earnings surprise of 31.93% in the last four quarters. The Zacks Consensus Estimate for 2018 earnings has risen by 72 cents to $2.95 in the last 90 days.