It has been an interesting first few months of 2018 throughout the global stock markets, with last year’s momentum briefly carrying over before being replaced by nervous, range-bound trading and concern over a number of macroeconomic factors.

Stocks have look poised to rebound from volatility this week, with a variety of positive economic figures inspiring confident trading throughout the Dow, S&P 500, and Nasdaq indexes over the past few days. Still, it seems foolish to attempt predicting whether markets will actually surge back to their highs just yet—especially consider trade woes between the U.S. and China remain unresolved.

Nevertheless, prudent investors should be spending their time picking up on whatever trends they can spot, and one of the most noticeable patterns we have seen recently is a divergence between small cap and large cap stocks. Both groups have, at times, been stuck in the mud during volatile stretches, but recently we have seen small caps pull away. 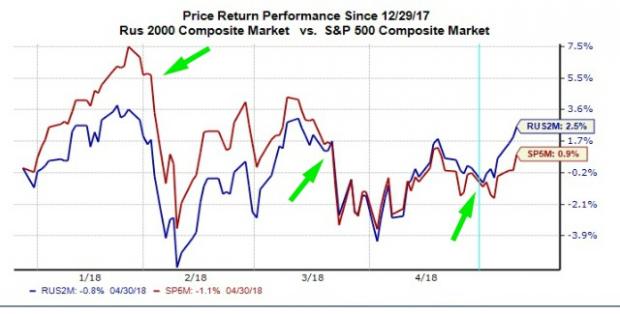 There are three key moments marked in the above chart. These all represent major milestones for the recent small cap trend, starting with the early February selling that wiped out the entire market’s New Year momentum.

That stretch of volatility was caused by concerns that inflation was starting to pick up steam. The latest non-farm payroll report showed a noticeable uptick in Average Hourly Earnings, and investors saw this as confirmation that inflation had returned and decided to pull out of stocks before it could do any damage.

“A strong economy and inflation means no more free money,” Zacks Strategist Dave Bartosiak said at the time. “Perhaps this is the bond market telling the US, ‘We’re a little concerned with that debt situation you’ve got now that you’ve cut those tax rates.’”

Of course, inflation concerns have since cooled and been replaced by other volatility catalysts—most notably, panic that the U.S. and China were on the brink of a tit-for-tat trade war.

The second moment marked on the chart above is the mid-March period that saw the S&P 500 forfeit its lead over the Russell 2000. This happened right around the time that reports of the Facebook (FB - Free Report) – Cambridge Analytica scandal first emerged.

This story obviously caused a significant selloff in Facebook shares, and considering that the social media giant is one of the largest companies in the S&P 500, it makes sense that it would have an effect on this index.

But it is also worth noting that data privacy concerns also reached the likes of Alphabet GOOGL and Twitter TWTR, which in turn caused volatility for many tech behemoths—including Nvidia NVDA and Apple AAPL—that had previously helped lift the sector to new heights.

This period also witnessed heightened trade war fears. About a week prior, President Trump signed proclamations imposing steep tariffs on steel and aluminum imports in a move that seemed aimed directly at China. This caused selling in some major manufacturing stocks and others who might have been targeted for retaliation from the Chinese. Such a phenomenon could explain why small caps closed the gap, as smaller firms doing mostly domestic business would be relatively unaffected by a trade battle.

But what exactly caused the Russell 2000 to start outpacing the S&P 500? This trend is our third date marked above, and it seemed to occur exactly on April 30.

The first thing we should note here is that Q1 earnings season was really starting to heat up at the end of April. A plausible theory to explain the surge in the Russell 2000 is that solid EPS and revenue growth was already baked in to the large caps after the tax cuts, leaving small caps with the better opportunity to shine.

It is also logical to think that this is simply a healthy sign for the market. Many investors have suggested that the small caps have been largely ignored over the past few years, and the Russell finally starting to outperform could be a signal that money is moving to the small caps—which should be encouraging for bulls.

Either way, this has been a noticeable trend for about two full trading weeks now, and it is definitely something that investors will want to keep their eyes on as we approach the second half of 2018.