Adjusted earnings of $1.24 per share outpaced the consensus mark by 20 cents and increased 30.5% year over year. Total revenues came in at $418.2 million, which exceeded the Zacks Consensus Estimate of $387.4 million and was up 9.6% year over year. Adjusted revenues of $384.7 million were up 0.2% from the year-ago quarter.

Also, the company’s surprise history has been impressive, having surpassed the consensus mark in each of the trailing four quarters, with an average positive surprise of 14.9%. For the second quarter, the Zacks Consensus Estimate has remained unchanged at $1.51 over the past 60 days.

So far this year, shares of Dun & Bradstreet have increased 2.7%, significantly outperforming the S&P 500’s gain of 1.9%. 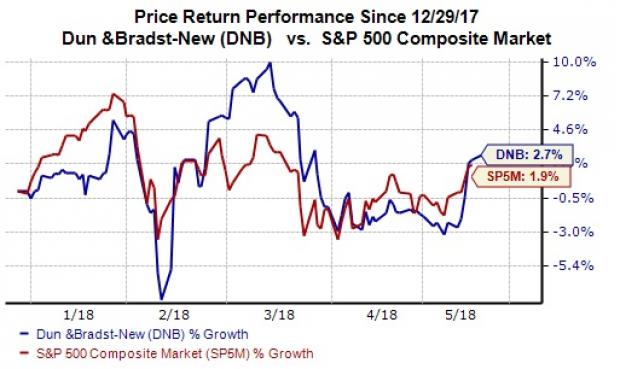 Acquisition of NetProspex and MicroMarketing in China, Bisnode in the U.K., the Irish operations (ICC), Indicee, Fliptop and Avention have expanded the company’s customer base, global presence and product portfolio. We believe that Dun & Bradstreet will continue to pursue strategic acquisitions, particularly in the emerging economies of the Asia-Pacific, which should eventually drive its overall results in the long haul.

Dun & Bradstreet has been launching new solutions, which leverage the benefits of its data and analytics capabilities. Also, applications like Visitor Intelligence, D&B Credit and new D&B Optimizer solutions for both Microsoft and Salesforce has gained significant traction. The company has invested in security and back-end software system upgrades as well.

Dun & Bradstreet relies on partnerships as key players have helped it bring many more customers into the fold. The company also spruced up its own data-as-a-service (DaaS) capabilities to attract larger partners. This, in turn, resulted in new agreements with many industry stalwarts like Sugar CRM, Oracle (ORCL - Free Report) Cloud for Business, the Salesforce (CRM - Free Report) Wave analytics platform, Lattice Engines and KPMG (for risk management), which have high analytics demand.

Furthermore, the company has partnerships with local providers in many countries, including Japan and Italy among others, which have helped it to penetrate regional markets within a relatively short span of time. Moreover, in July 2017, the company deployed Microsoft's (MSFT - Free Report) cloud service to lend customers an easy access to data.

Kosmos to Acquire Interest in EG-24 Block From Ophir Energy