However, stringent environmental regulations and fluctuations in commodity prices are growth deterrents. 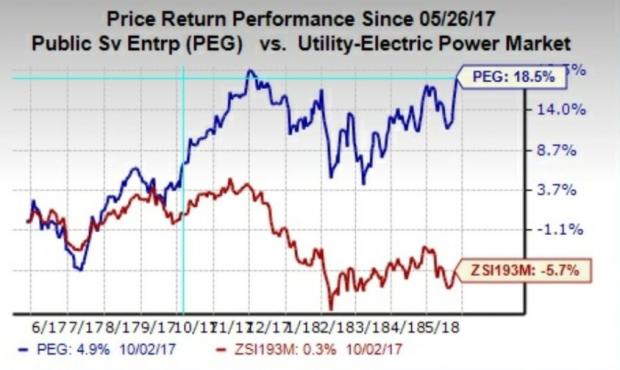 The company’s current capital investment plan is to spend in the range of $13-$15 billion on its energy infrastructure during 2018-2020. Of this, the company expects to spend $11.5-$13.2 billion for its baseline infrastructure program, at a CAGR 7-9% in rate base over the next three years.

PSE&G consistently upgrades gas distribution system as part of its Gas System Modernization Program (“GSMP”), which aims to replace approximately 510 miles of cast iron and unprotected steel gas mains along with 38,000 unprotected steel service lines to homes and businesses.. In April 2018, the company settled with the BPU for a GSMP II program, an extension of its GSMP, through which it aims to invest $1.9 billion over a five-year period beginning in 2019.

PSEG Power is constructing and operating five new combined-cycle gas plants — a 755-MW facility at the Keys Energy Center in Maryland; a 540-MW facility on its existing Sewaren station in New Jersey. These projects, when completed will further lower carbon footprints of the company.

However,participation in the wholesale energy market exposes Public Service Enterprise to commodity price volatility, which is cyclical in nature.Stringent environmental regulations,risks including breakdown, failure or damage of equipment’s or processes of transmission and distribution may dent growth.

NRG Energy pulled off average positive earnings of 507.93% in the last four quarters. The Zacks Consensus Estimate for 2018 EPS moved up 10.4% in the last 60 days.

IDACORPdelivered average positive earnings of 4.98% in the last four quarters. The Zacks Consensus Estimate for 2018 EPS moved up by a penny in the last 60 days.

ALLETE pulled off average positive earnings of 4.62% in the last four quarters. The Zacks Consensus Estimate for 2018 EPS moved up 0.6% in the last 60 days.

5 Reasons Why Darden (DRI) Can Satisfy Your Appetite Better