NVIDIA Corporation (NVDA - Free Report) , at Computex 2018, unveiled NVIDIA Isaac, a platform consisting of a virtual simulator for robots along with new hardware and software suites. The kit is priced at $1,299 and is expected to be available in the market by August.

The platform is equipped with “the world’s first computer designed specifically for robotics” called Jetson Xavier. Being powered by more than 9 billion transistors, it is capable of delivering over 30 TOPS (trillion operations per second), while consuming much less energy. Alongside, the platform is loaded with Isaac robotics software for training, deployment and simulation.

Along with this launch, NVIDIA also announced its collaboration with Taiwan’s Ministry of Science and Technology (MOST) for the development of the latter’s deep learning technologies and strengthening of its AI ecosystem.

Notably, in the previous month, MOST unveiled “its Taiwania HPC supercomputer powered by NVIDIA technology.” The new partnership, expected to extend over the next 10 years, will focus on the five core areas of research, training, innovation, start-ups and supercomputing infrastructure.

NVIDIA has been gaining from its strategy of applying its GPUs in the artificial intelligence (AI) models, which has helped it expand its footprint in several fast-growing fields, including self-driving cars and datacenter.

Notably, the stock has rallied 33.1% on a year-to-date basis, outperforming the industry’s rally of 22.5%. 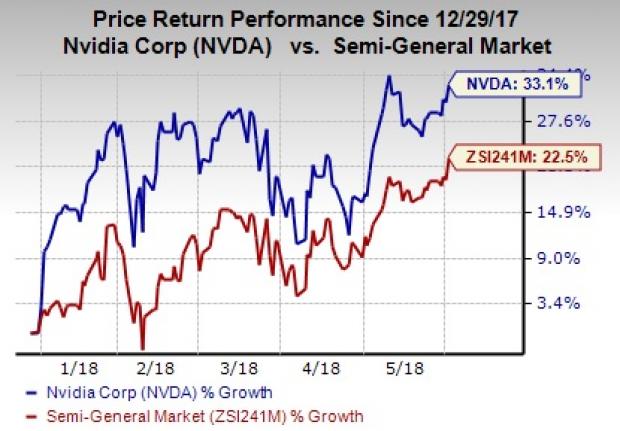 How Will NVIDIA Benefit?

We believe these AI related initiatives will aid the company’s growth in the near future, given the accelerated adoption of the technology.

TechEmergence quoted Tractica stating that direct and indirect applications of AI are expected to generate revenues of around $36.8 billion by 2025 from $643.7 million in 2016, representing CAGR of 56.8% in the aforementioned timeframe.

The incorporation of AI technologies into industries like construction, manufacturing, agriculture and logistics will ease the way of working in these industries, which otherwise require significant human labor.

NVIDIA, backed by the multi-industrial adoption of its AI technologies, is anticipated to gain from the massive growth opportunity in the market, which will eventually be beneficial for the company’s top line.