Is The Rock Partnership Actually Bad For Under Armour (UAA) Stock?

Shares of Under Armour (UAA - Free Report) climbed 3.57% on Tuesday to close at $23.53 as part of a sustained run of success for the previously struggling sports apparel company. Some of Tuesday’s gains seem to stem from news that Dwayne ‘The Rock’ Johnson’s new shoes sold out extremely quickly.

Under Armour released The Rock’s “Project Rock 1” men’s training shoes on Memorial Day. The shoes, which Under Armour called the movie star’s first signature sneaker, were released in limited quantities for $120 on UnderArmour.com and select UA retailers. The shoes reportedly sold out in 30 minutes, according to Instinet analysts, and are currently listed as “Sold Out” on Under Armour’s website.

This is not the first time this has happened. Last April, Under Armour rolled out Johnson’s “Project Rock Delta” sneakers in a similarly limited release-fashion and they sold out quickly as well. “To stop production on a blazing hot product when it's at its height of sales is a very bold business decision," Johnson wrote on Instagram last year. "But our game plan here is to create a window of success where the people always win but also establish that the window doesn't stay open forever."

Johnson, who signed with Under Armour in 2016, provided metaphorical reasoning for last year’s limited release. But there is a much simpler and somewhat logical business reason behind this tactic. Under Armour planned this limited release to help create buzz—a tactic that other footwear players, such as Nike (NKE - Free Report) do regularly—so investors shouldn’t worry that this is a missed opportunity to cash in.

“We believe that the limited availability (and subsequent restocking) is part of the company’s plan for managing the franchise to generate buzz and promote a ‘call to action’ and represents a positive for brand equity,” Instinet analysts wrote in a note to clients.

The question is should Under Armour investors be so excited that Johnson has started to play such a large role in the company’s marketing and apparel strategy.

On its face, this a great sign because Under Armour only has 5.5 million followers and its second biggest star, Steph Curry, claims 20.4 million. Therefore, Johnson has the ability to promote the Under Armour brand more than anyone else at the company.

With that said, Johnson is selling shoes that people are meant to lift weights and workout in, at a time when the sportswear industry is moving toward athleisure wear and footwear and apparel that can be worn far away from the gym.

In essence, the success of Johnson’s shoes and his other Under Armour apparel helps illuminate a massive problem for the company that aspires to be on the same level as Nike and Adidas (ADDYY - Free Report) . Johnson’s workout-specific gear is what Under Armour originally became famous for. Meanwhile, Curry’s shoes have not lived up to their outsized expectations and Under Armour’s presence in the world’s most popular sports, soccer, is practically nonexistent at this point.

This hasn’t stopped Under Armour from climbing recently, but that is more likely due to how cheap the stock had become. Under Armour is in the midst of a major 2018 restructuring plan in which the company expects to spend between $110 million to $130 million. Tuesday’s gains are also part of a much larger and longer Under Armour run. Since November 1—right after UAA reported its first-ever quarterly sales decline in Q3—the company’s stock price has skyrocketed, crushing the S&P 500 and Nike. 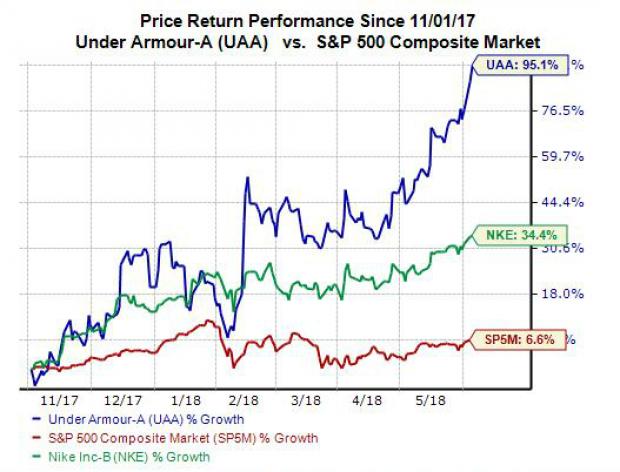 With that said, UAA's massive rise has made it look very expensive. Coming into Tuesday, Under Armour was trading at 91.8X forward 12-month Zacks Consensus EPS estimates, which marks an all-time high, and comes in far above its year-long low of 29.1X.

Under Armour’s earnings are projected to sink about 5% year over year in 2018, and one negative revision has kept the stock at a Zacks Rank #3 (Hold). Under Armour is expected to see some earnings momentum next year, with our current estimates calling for adjusted profits to soar about 87% from 2018’s estimated totals as the company works through its restructuring plan.

But, while some may say that any growth is good for investors, take a quick step back to look at the big picture here. Johnson cannot help Under Armour get to the heights that many hoped the company could reach because although he and his movies may have mass appeal, his apparel and shoes are far less marketable to a wide audience.

Johnson’s Under Armour successes could even be the start of a bigger overall shift back to the company’s roots, which would mean that its days of chasing Nike for market share are all but over.