LyondellBasell (LYB) Up 44% in a Year: What's Driving It?

Shares of LyondellBasell Industries N.V. (LYB - Free Report) have rallied around 44% over a year. The company has also outperformed its industry's gain of roughly 12% over the same time frame.

LyondellBasell, a Zacks Rank #3 (Hold) stock, has a market cap of roughly $46.2 billion and average volume of shares traded in the last three months is around 2,446.6K. The company has expected long-term earnings per share growth of around 9%.

Let's take a look into the factors that are driving this chemical maker. 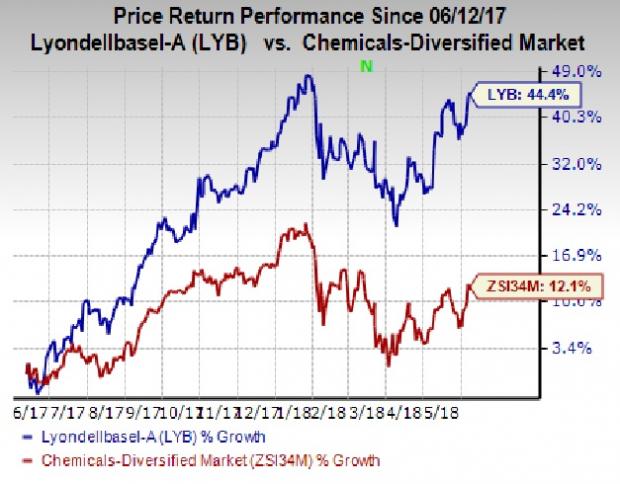 Forecast-topping earnings performance, upbeat outlook and strong prospects stemming from the planned acquisition of A. Schulman, Inc. have contributed to the rally in LyondellBasell's shares.

LyondellBasell’s profits shot up 55% year over year to in the first quarter, aided by higher margins and the company’s organic and inorganic growth initiatives. Earnings and revenues for the quarter both topped the Zacks Consensus Estimate.

The company, during its first-quarter call, said that it sees seasonal margin improvements in oxyfuels and refining. It also expects to benefit from continued high operating rates in the second quarter. Per management, the imbalance between ethylene production and consumption is expected to improve as the downstream derivative units attain full operating rates.  The company also noted that strong global demand and higher oil prices continue to support strong polyolefin pricing.

LyondellBasell is executing its expansion projects to leverage the U.S. natural gas liquids advantage. It remains on track with the construction of an HDPE plant on the U.S. Gulf Coast that will employ its proprietary Hyperzone PE technology. The company’s expansion initiatives are expected to boost capacity and add to its earnings.

Moreover, LyondellBasell, in February, agreed to buy A. Schulman in a deal worth $2.25 billion, a move that will create a premier global provider of advanced polymer solutions with extensive geographic reach, leading technologies and a diverse product portfolio. A. Schulman is a leading supplier of high-performance plastic compounds, composites and powders.

The company, last month, secured the approval from the Chinese State Administration of Market Regulation ("SAMR") for the proposed buyout. The acquisition is expected to consummate in second-half 2018.

The buyout doubles the size of LyondellBasell's existing compounding business. It also creates a platform for future growth with reach into additional high-growth markets such as packaging and consumer products, electronics and appliances, building and construction, and agriculture. The acquisition will enable the company to offer a comprehensive range of innovative solutions to its customers.

LyondellBasell expects to capture $150 million in run-rate cost synergies within two years. The buyout is also expected to be accretive to earnings within the first full year following its closure.

Westlake Chemical has an expected long-term earnings growth rate of 12.2%. Its shares have rallied roughly 81% over a year.

Chemours has an expected long-term earnings growth rate of 15.5%. The company’s shares have gained around 29% in a year.