Should You Buy Dropbox (DBX) Stock?

Shares of Dropbox DBX jumped over 5% through midday trading Thursday without much significant news to speak of. So let’s take a look at what might have investors excited about the newly public tech company and see if its stock is worth buying at the moment.

Dropbox went public in late March at $21 per share, and saw its stock price skyrocketed more than 35% during its first day of trading as investors jumped into what was, at that point, the biggest tech IPO of 2018—and the first tech unicorn to hit the market since Snap (SNAP - Free Report) . Since Dropbox’s IPO, streaming music power Spotify SPOT also began trading, somewhat overshadowing the online storage company.

San Francisco-based Dropbox, which started as a free service to store and share music, photos, and other large files, now competes directly against some Google GOOGL offerings, as well as Microsoft MSFT, Amazon AMZN, and others in the storage industry. Today, Dropbox offers an extremely slimmed down, limited storage version for free, along with multiple levels of business offerings that range from “Standard” at $15 per user, per month—starting with 3 users—up to enterprise level offerings. The company currently boasts publicly traded clients including Under Armour UAA, Hyatt H, and others.

Dropbox’s business is relatively simple: it allows users to share and store an unlimited amount of data with users almost anywhere in the world on a pretty easy to use portal via the internet. The company, which calls itself a “collaboration platform,” could easily become even more popular as more people work from home and remotely.

The company currently boasts over 500 million registered users in over 180 countries, and reported revenues of $1.1 billion in 2017, which climbed from $844.8 million the year before. Meanwhile, Dropbox’s net loss nearly halved from $210.2 million in 2016.

Shares of Dropbox were up roughly 8.7% over the last three months, before Thursday’s climb. And investors should note that its full-year growth projections look rather strong. 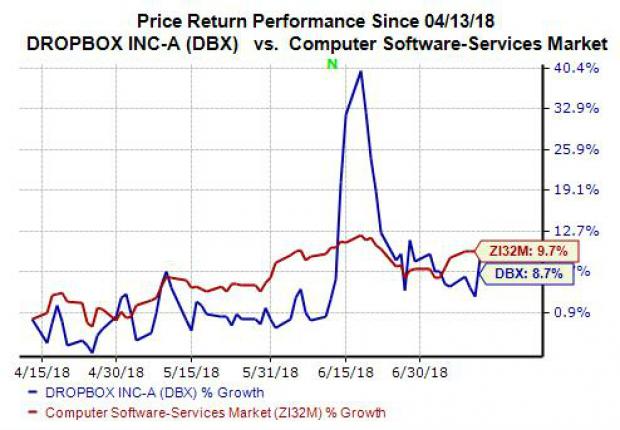 Our current Zacks Consensus Estimates are calling for Dropbox’s full-year revenues to hit $1.35 billion, which would mark a roughly 22% surge from the year-ago period. Moving onto the other end of the income statement, the company is expected to post adjusted quarterly earnings of $0.06 per share, with its full-year EPS figure expected to reach $0.28 per share. These bottom-line estimates are rather impressive for a young tech company, which often post adjusted losses.

Dropbox is currently a Zacks Rank #2 (Buy) and sports an “A” grade for Growth and a “B” for Momentum in our Style Scores system. DBX has also seen its earnings estimate revisions trend higher recently.

JPMorgan (JPM) Adds 0.4% Ahead of Earnings: What To Watch