JA Solar Becomes Private, Stock to be Delisted From Nasdaq

Subsequent to the merger, the company requested trade suspension of its American Depository Shares (ADS) on Nasdaq, as of Jul 17, 2018.

In November 2017, JA Solar announced that an investor consortium, as mentioned above, will purchase the company in an all-cash transaction, thereby translating into an equity value of approximately $362.1 million. The investor group stated that it will pay $1.51 per share in cash without interest to ordinary shareholders of JA Solar.

Holders of the ADS, which are equivalent to five ordinary shares, will be paid $7.55 in cash without interest.

In March 2018, JA Solar’s shareholders gave their approval for the agreement. Notably, the closure of the deal was a bit delayed compared with the company’s expectation for the same by first-quarter 2018. (Read More: JA Solar's Merger Deal Receives Shareholders' Nod).

Rationale Behind the Privatization

Almost around the time when JA Solar decided to go private, the Chinese government issued guidelines for boosting private investment in manufacturing including enhancement of financial support to private firms. In particular, the government is pushing private firms to invest in infrastructure projects that comprise solar energy products. This factor might have been a primary driving force behind JA Solar’s decision of becoming a private firm.

Moreover, a publicly trading company has to bear huge regulatory as well as procedural costs to maintain all the timely filings of financial reports. Therefore, becoming a private firm means less regulatory and procedural costs, which might have been another reason why JA Solar planned to delist itself from the share market.

In the first week of June 2018, the Chinese government announced its decision to cut down subsidies on renewable energy. This, in turn, created quite an upheaval in the share market, causing Chinese solar stocks to tumble. While initially the news came as a shock for these companies, the ultimate motive of the administration was to instill sustainable development in the nation’s solar industry.

Actually, such a strategy is very common in the development stage of any industry. In the nascent stage, subsidies are provided to build up an industry firmly and once it stands strong among others, subsidies are reduced or abolished in some cases.

With China being the largest consumer of solar energy in the world, subsidy depletion from government’s side should not hamper the industry’s growth. This is because worldwide investments will pour in to fill in the gap. Evidently, according to a report by Forbes, emerging markets dominated investment in clean energy in the first quarter of 2018, with more than 40% of funding going to projects in China. Thus, reflecting solid growth prospects for solar companies like JA Solar on the domestic front.

Although the aforementioned investment was 10% lower than that of first-quarter 2017, global solar installations are expected to exceed last year’s record of 98GW (according to Bloomberg New Energy Finance [BNEF]) report) by 2018 end. Notably, one of the two key catalysts behind this solar installation capacity is the ongoing boom in China for both utility-scale and smaller, local Photovoltaic systems.

Therefore, we believe that there is immense solar growth prospects in China, which in turn should strengthen JA Solar’s footprint in the nation over the long run. Additionally, it does not have to bear the costs and risks of being a publicly traded firm.

In a year’s time, JA Solar’s shares have gained 19.6% compared with the industry’s 23.2% rally. The underperformance may have been caused by challenges that the company faces in the solar industry like the anti-dumping policies by the United States. 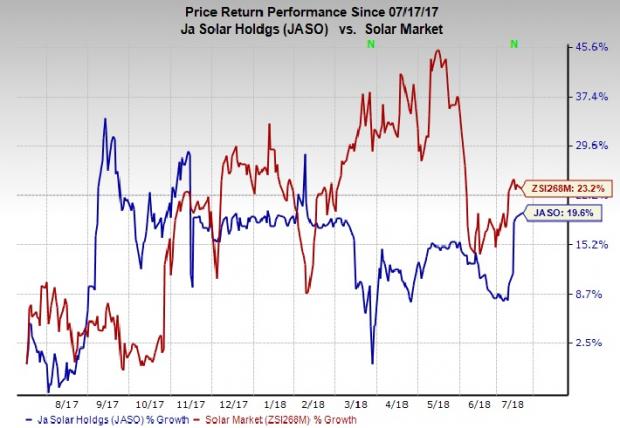 JinkoSolar has a solid long-term earnings growth rate of 10%. The Zacks Consensus Estimate for 2018 earnings moved up 74.5% over the past 90 days.

ReneSola delivered a positive earnings surprise of 1,300.00% in the last reported quarter. The Zacks Consensus Estimate for 2018 earnings moved north 225% over the past 90 days.

Sunrun came up with an average positive earnings surprise of 16.33% in the trailing four quarters. The Zacks Consensus Estimate for 2018 earnings climbed 9% over the past 90 days.