Should You Buy Twitter (TWTR) Stock Ahead of Q2 Earnings?

Twitter saw its stock price surge Wednesday in a sign that investors might be anticipating big things from the social media firm when it reports its quarterly financial results before the market opens Friday. But the question is what should investors really expect from Twitter’s Q2 earnings release and should they consider buying shares of TWTR despite some of the recent account suspension news?

The Washington Post reported earlier this month that Twitter had started to up its efforts to remove or close fake accounts from its platform, with the Post suggesting that the figure reached about 70 million in May and June. Twitter’s CFO Ned Segal quickly responded to the story on Twitter, stating that “most accounts we remove are not included in our reported metrics as they have not been active on the platform for 30 days or more, or we catch them at sign up and they are never counted.”

“If we removed 70M accounts from our reported metrics, you would hear directly from us,” Segal continued. “This article reflects us getting better at improving the health of the service. Look forward to talking more on our earnings call July 27!”

Analysts and investors have taken Twitter at its word. J.P. Morgan (JPM - Free Report) reiterated the firm’s “overweight” rating, while also predicting that the company’s second-quarter revenues will come in above expectations. “We believe Twitter’s platform continues to strengthen, led by product improvements such as increasing video content, bookmarks, and information quality efforts, along with more compelling returns to advertisers,” analyst Doug Anmuth wrote in a note to clients Wednesday. “We remain positive on the stock heading into 2Q.”

Investors should note that much of the excitement about Twitter comes from the company’s growing live streaming and video business. Twitter streamed more than 1,300 live broadcasts last quarter and also announced that it signed more than 30 new partnerships, including deals with the likes of Fox Sports (FOXA - Free Report) , NBCUniversal (CMCSA - Free Report) , Viacom , and Disney (DIS - Free Report) .

The key here is that live video attracts more advertisers, and like Facebook , Twitter makes most of its money from advertising. The company’s advertising sales—which accounted for roughly 86% of Twitter’s $665 million total Q1 revenues—climbed 21% from $474 million in the year-ago period to $575 million. Meanwhile, the social media company’s international ad revenue surged 52%.

Now that we have covered some recent Twitter news and its current business outlook, let’s move onto its stock price movement. 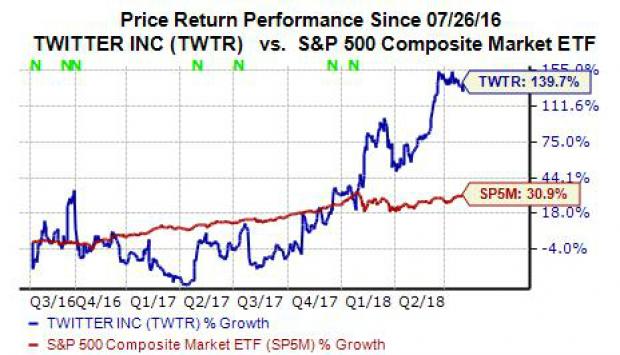 Twitter is expected to see its adjusted Q2 earnings skyrocket 112.5% to touch $0.17 per share, based on our current Zacks Consensus Estimates. The company’s fiscal 2018 earnings are projected to soar by nearly 73% to reach $0.76 per share.

The company is projected to see its Q2 revenues pop by nearly 22% to hit $700.02 million. For the current fiscal year, Twitter revenues are projected to hit $2.94 billion, which would mark a roughly 20% surge.

Twitter has received one upward earnings estimate revisions within the last 60 days for Q2, against zero downward changes. The social media company has also seen two positive full-year revisions during this same period, as well as one more upward revision for the current full-year and one for fiscal 2019, within the last 30 days.

Investors should note that Twitter’s Most Accurate Estimate—the representation of the most recent analyst sentiment—is calling for earnings of $0.18 per share, which is one cent better than our current consensus estimate.

Furthermore, TWTR has topped our earnings estimates in the trailing 14 periods. We judge the price effect of these earnings beats by comparing the closing price of the stock two days before the report and two days after the report, and Twitter stock has made major moves during five out of the last six periods—with Q1 being the lone exception. In fact, shares of TWTR surged 17% after its Q4 release and 26.5% in the third quarter of 2017. However, Twitter stock has tanked during two of these recent windows as well.

Twitter is currently a Zacks Rank #1 (Strong Buy) and sports an “A” grade for Growth and a “B” for Momentum in our Style Scores system. The company is also expected to profit from an overall shift toward internet-based TV and live streaming. Therefore, Twitter stock might be worth considering ahead of the release of its second-quarter financial results, which are due out before the opening bell on Friday, July 27.

Will Starbucks' (SBUX) Q3 Earnings Pull It Out of Its Growth Slump?