The company said it would not use the banking data for ad-targeting purposes, nor would it share the information with third parties. However, this possibility will likely become a major point of concern as users, people, and government officials grow more concerned about Facebook’s data privacy. One large U.S. bank, citing privacy concerns, has already pulled away from talks, according to WSJ sources.

All in all, Facebook’s goal here is simple. The company wants to offer more features in an effort to get users to spend more time on Facebook, highlighting the company’s user growth problems that led to its massive selloff.

Last week, Facebook and its photo and video-sharing app Instagram announced a series of initiatives aimed to let users feel like they have more control over how much time they spend on the platforms. Users can now set reminders to stop using Facebook or Instagram after a set amount of time, while also temporarily blocking notifications.

The firm now offers users an activity dashboard, which shows them the average time spent on the platforms on a daily and weekly basis. “A big part of that is making sure that people are in control of their experiences and they can be mindful and intentional about how they’re spending their time, how much time they’re spending, when they engage, how they engage,” Instagram executive Ameet Ranadive said at a press briefing last week.

Facebook’s initiative comes after both Apple and Google (GOOGL - Free Report) made similar moves to allow people to understand how they spend their time on their phones in an effort to make people feel better about their use. Facebook and other tech giants are now actively trying to align themselves on the side of the user as awareness around some of the ills of social media and phone usage become more mainstream.

Facebook’s banking push and time-spent features were both made to make users stay on their platforms longer and not abandon ship altogether, because advertisers would follow. Facebook, which saw its quarterly revenues climb by 42% to hit $13.23 billion, cannot afford to lose adversities since ads accounted for nearly 99% of its Q2 revenues.

Plus, Zuckerberg’s company has already seen a slowdown in user growth that led to its historic downturn. 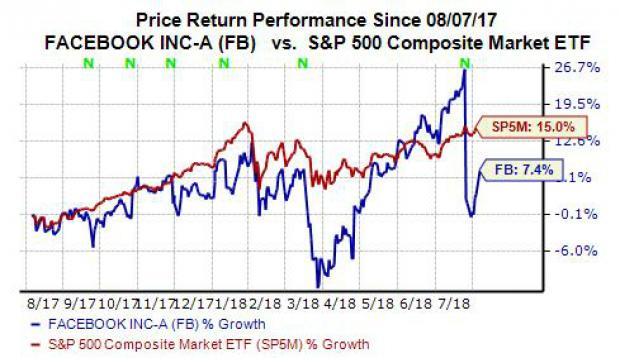 Facebook closed the second quarter with 185 million DAUs in the U.S. and Canada, which marked roughly 1% growth from the prior-year period. Investors might be nervous to note that FB saw no sequential growth in this key region. At 241 million, the firm’s MAU’s were also flat from Q1 and up only 2% from the year-ago quarter. This North American slow down is a trend that helps show just how saturated the U.S. and Canadian markets have become.

Meanwhile, FB saw its DAU totals in Europe fall from 282 million in Q1 to 279 million, which also marked less than a 3% year-over-year climb. Facebook also saw a sequential decline in terms of MAUs in the region.

Facebook’s continued slowdown in the U.S., Canada, and Europe might have been somewhat offset by FB’s growth elsewhere. But these two regions generated roughly 72% of FB’s total Q2 revenues, while only accounting for approximately 28% of Facebook’s total Monthly Active User base.

Facebook’s banking push highlights how important it is to keep users on its platforms, but also shows just how desperate the social media firm has become amid its user growth problem. FB’s banking push might also draw heat from governments looking to crack down on tech giants, and its time-saving measures could make users more aware of some of social media’s drawbacks.

Snap Gains 2.5% Ahead of Earnings: What to Expect