Thriving economy, a strong confidence among consumers and the tax cut have been driving domestic gasoline demand. Also, the input cost for the American refiners is low despite the massive crude recovery.

To meet the surging demand for fuel and to capitalize on the high refinery crack spread — the gap between the price of raw crude used as input by refiners and the final petroleum products derived —, the refineries are processing record crude volumes. In fact, the crude oil input into refineries will likely continue to expand through 2018 and 2019 respectively, according to the U.S. Energy Information Administration (EIA).

Per EIA, refineries in the United States have processed more than 18 million barrels of oil volumes per day (B/D) — on a four-week average basis — through the week ended Jul 6, 2018. This is the first time that gross refinery input in America crossed 18 million B/D. 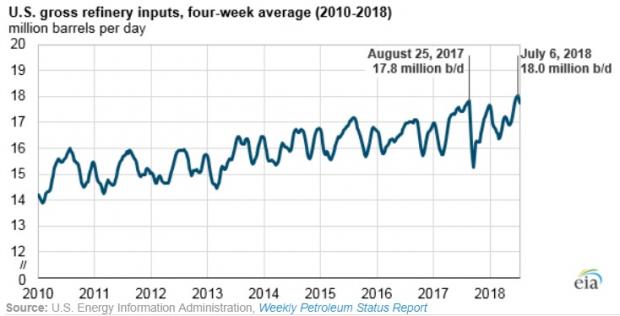 Notably, since 2010, the American refiners never processed nowhere near the record crude volumes except for 17.8 million B/D through the week ended Aug 25, 2017. In the following period, the gross refinery crude input plunged as Hurricane Harvey tore through the Texas Gulf Coast, forced workers in the U.S. oil industry to evacuate production facilities and shut down refineries.

A steep improvement in refinery inputs implies serving the growing demand for motor gasoline both in the domestic and the international markets.

Prospering economy in America has been supportive of massive gasoline and diesel demand. Per U.S. Department of Commerce, the gross domestic product rose 4.1% through the April-to-June quarter of 2018, marking the highest pace in almost four years. Notably, the economic prowess of the domestic market was broad-based and hence, was definitely not dependent on any particular sector’s performance.

Republican tax reductions will likely help sustain gasoline demand going forward. Lower taxes at individual levels will improve disposable income so that significantly, more money will be spent by the Americans at the pumps.

Low input cost following pipeline bottleneck problems and plentiful domestic oil production has been aiding the refiners to run their refinery plants harder. The dearth of pipeline capacity is prompting operators in the Permian Basin to sell stranded oil at a big discount. Eventually, the input cost for refiners is declining despite overall crude prices having made a significant recovery.

Decreased input costs, reflected in favorable market crack spreads, already backed most refiners to reap massive benefits through the April-to-June quarter of 2018. Phillips 66’s (PSX - Free Report) refining margins were recorded at $12.28 per barrel, jumping from $8.44 in the year-ago quarter. This impressive refining margin is attributable to the company’s strongest quarterly earnings per share (EPS) since third-quarter 2015.

During second-quarter 2018, Marathon Petroleum Corp. (MPC - Free Report) reported $15.40 per barrel of refined margin, having increased from $11.32 in the April-to-June quarter of 2017, courtesy of the commendable crack spreads in the Midwest and Gulf Coast. This propels the company to post highest EPS since the past five years.

American consumers are not too much bothered about the escalating trade war tensions between the United States and China. Rather, they are very much optimistic about the domestic economy. This is reflected in the consumer confidence index of 133.4 for August, which is the highest in nearly 18 years.

We can say that bullish consumer sentiment will also help American drivers visit the pump more often, thus helping refiners and fuel marketers to garner better results. This optimistic outlook for refiners is finding reflections in the Zacks Industry Rank.

The group’s Zacks Industry Rank, basically the average of the Zacks Rank of all member stocks, indicates a continued outperformance in the near term.

The Zacks Oil Refining & Marketing industry currently carries a Zacks Industry Rank #107, which places it at the top 42% of more than 250 Zacks industries. Our research shows that the top 50% of the Zacks-ranked industries outpaces the bottom 50% by a factor of more than 2 to 1.

We are asking investors to keep an eye on the following refiners, which witnessed positive earnings estimate revisions in recent times.

Headquartered in Houston, TX, Phillips 66 is among the leading refiners in the world. The company’s earnings beat the Zacks Consensus Estimate in each of the prior four quarters, the average positive earnings surprise being 17.7%.

Murphy USA Inc. (MUSA - Free Report) is a leading independent retailer of motor fuel and convenience merchandise in the United States. The company delivered an average positive surprise of 3.38% in the preceding four quarters.

The company has seen the Zacks Consensus Estimate for current-year earnings being moved north to $4.53 from $4.37 over the past 30 days.

Based in San Antonio, TX, Andeavor is currently operating 10 refineries in Western and mid-continent regions of the United States.

Findlay, OH-domiciled Marathon Petroleum Corporation is a leading independent refiner. The company’s key metrics managed to surpass the consensus estimate in three of the trailing four quarters, the average beat being 0.81%.

The Zacks Consensus Estimate for the ongoing year’s earnings has been revised upward to $5.13 from $4.76 over the past 60 days.