Shares of Amazon AMZN popped nearly 2% in midday trading Tuesday to lift the e-commerce powerhouse to over $1 trillion in market value. Amazon joined Apple AAPL as just the second publicly listed U.S. company to join the trillion-dollar club. On top of this splashy news, Amazon stock still looks like a strong buy at its new high.

Amazon saw its stock price jump 1.9% on Tuesday to top the $2,050.27 per share mark needed to hit this historic milestone. It took Amazon only 165 trading days to soar from $600 billion to $1 trillion. Plus, shares of AMZN had skyrocketed 111% over the last 12 months.

Looking back even further, Amazon’s valuation sat at around $250 billion in September 2015. Investors will note Amazon’s insane three-year rise, which helped prove the company’s outsized impact on the economy and the stock market. 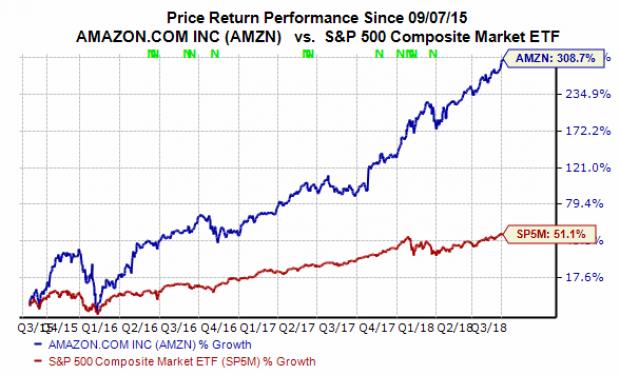 Amazon will likely grab even more of the spotlight in the coming days as it rides its $1 trillion wave. But, AMZN stock looks like a strong buy at the moment for an array of reasons.

Morgan Stanley MS analysts upped their price target for Amazon from $1,850 to a whopping $2,500 per share last week. The new price target also represented the highest of all 41 analysts who cover AMZN, according to FactSet. Morgan Stanley cited the strength of Amazon’s high margin cloud computing business, among other units, in their note to clients.

Amazon claimed 34% of the total cloud computing market during the second quarter, according to Synergy Research Group, which came in well above Microsoft’s 14%, IBM’s IBM 8%, Google’s 6%, and Alibaba’s BABA 4%. Meanwhile, Amazon’s core commerce business surged 29% to hit $31.86 billion, which accounted for 60% of Q2 revenues.

Looking ahead, the firm that forced the likes of Walmart WMT, Target TGT, and Costco COST to revamp their business models, looks poised to become a bigger player in the pharmaceutical world with its PillPack purchase. The firm has also reportedly considered entering the insurance comparison and gas station businesses, as well as the vacation discount industry. On top of that, Amazon Prime has competed alongside Netflix NFLX and Hulu. Now, with its growing content library, the company looks ready to take on Disney DIS and Apple down the road as well.

Better yet, Amazon has earned 18 earnings estimate revisions with 100% agreement to the upside over the last 60 days, for both fiscal 2018 and 2019. During this same time period, AMZN has seen 14 upward revisions for Q3 against just one downward change. AMZN’s almost completely positive earnings revision activity helps it earn a Zacks Rank #1 (Strong Buy) standing.

The company also boats an “A” grade for Growth in our Style Scores system. Our current Zacks Consensus Estimate is calling for Amazon’s Q3 revenues to surge by 30% to hit $56.91 billion. Meanwhile, its full-year revenues are expected to reach $234.82 billion, which would represent a roughly 32% climb. Lastly, Amazon, which has historically sacrificed earnings for expansion, looks ready to become a more profitable company.

AMD Stock Soared 11%, But Is Now Really the Time to Buy?