Shares of tech giants Apple AAPL, Amazon AMZN, and Netflix NFLX dropped once again Tuesday. Meanwhile, retailers tumbled on the back of Target’s TGT earnings miss. And both the Dow and the S&P 500 closed in the red once again.

So, amid all of this turmoil, let’s take a look at how FAANG stocks have helped drag the market down.

The Dow dipped 2.2% or more than 550 points and the S&P dropped 1.8% Tuesday. The two most important U.S. indexes have turned negative for the year and are on track to close in the red in 2018.

Netflix stock closed regular trading down 1.3%. Yet, much of the blame might fall on Apple, which saw its stock price tumble 4.8% during regular trading Tuesday to hit $176.98 per share. Apple’s recent decision to stop breaking down iPhone unit sales going forward helped lead to the firm’s recent selloff.

Previously mighty FAANG stocks have collectively lost more than $1 trillion in market value from their recent highs. Looking ahead, more and more investors might start to take their profits while they can from the likes of Apple and other FAANG stocks amid the current market conditions.

Now it’s time to dive into some charts to see how these tech giants have performed recently to help put everything into perspective. Just a quick reminder before we start, Facebook FB, Amazon, Apple, Netflix and Google-parent Alphabet (GOOGL - Free Report) make up the FAANG stocks.

Let’s start with an overview of the last five years to help give us a sense of how these tech powerhouses have performed compared to the larger market—in this case against the S&P. We can see that all of the stocks destroyed the index, with Amazon and Netflix coming out on top. 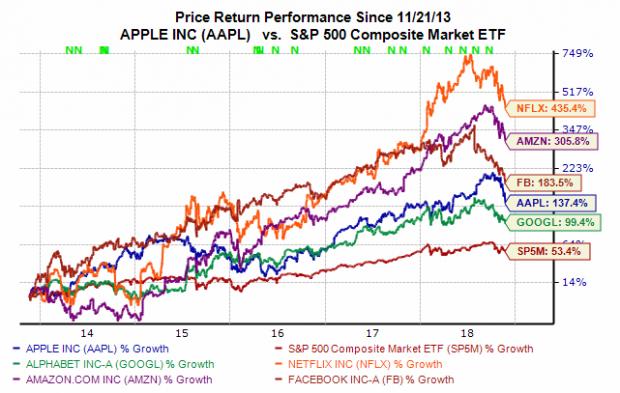 As we narrow our focus, we can see that AMZN and NFLX remain FAANG’s best-performing stocks. However, signs of weakness also started to show up for some of the group’s members over a three-year stretch. In fact, Facebook stock is up just 24% in the last 36 months after its dismal 2018. This decline helps FB stock fall below the S&P’s roughly 29% climb. Meanwhile, GOOGL stock is up 33%. 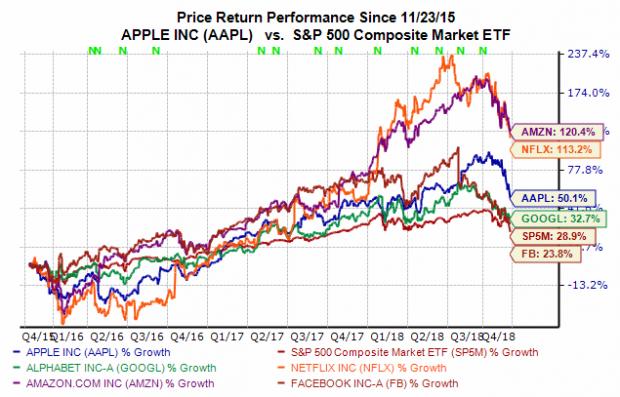 Moving on, investors can see that shares of both Facebook and Google are now in the red over the last year, with FB stock down roughly 27%. Google, on the other hand, officially turned negative for 2018 only recently. Meanwhile, Amazon and Netflix’s outsized growth has helped their shares remain up over 30% during the past 52 weeks, which comes in well above the S&P’s 3% climb. 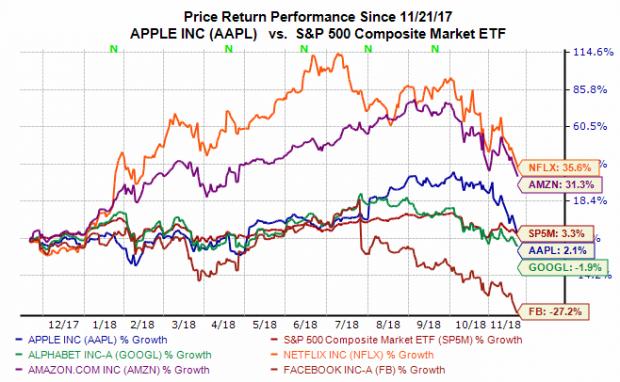 The last chart captures the past three months and helps show just how quickly the rest of the FAANG stocks have fallen from grace. Questions about where the market goes next remain paramount as these tech behemoths continue to plummet. 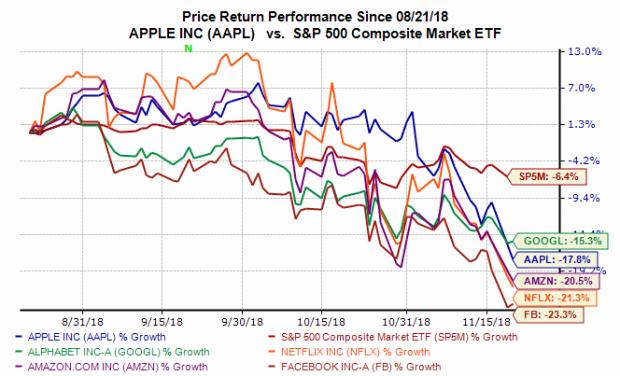 A Complete History of Black Friday