Cleveland-Cliffs Inc.’s (CLF - Free Report) board has authorized the buyback of its outstanding common shares. The authorization is active until Dec 31, 2019.

Per the share repurchase program, Cleveland-Cliffs will have considerable flexibility to repurchase shares worth up to a maximum of $200 million. The company can buy the shares through acquisitions in the open market or privately-negotiated transactions, which also include accelerated share repurchases.

The company stated that it is not obligated to make any purchases. Moreover, the program may be discontinued or suspended at any time. According to Cleveland-Cliffs, the disconnect between the current volatility in the capital markets and its strong profitability have provided opportunity for a highly accretive use of capital through repurchase of its common shares.

Shares of Cleveland-Cliffs have rallied 31% in the past year, against the industry’s 5.7% decline. 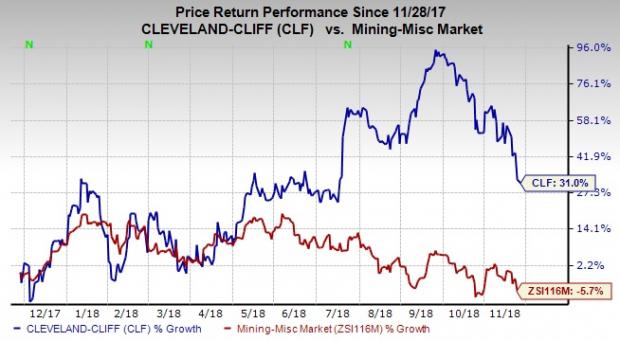 Last month, Cleveland-Cliffs stated that it expects to realize U.S. Iron Ore revenue rates in the range of $105-$110 per long ton, assuming that steel prices, pellet premiums and iron ore prices will average for the rest of 2018 their respective year-to-date averages.

CF Industries has an expected long-term earnings growth rate of 6%. The company’s shares have gained 20.9% in the past year.

Methanex has an expected long-term earnings growth rate of 15%. Its shares have gained 9.7% in a year’s time.

Mosaic has an expected long-term earnings growth rate of 7%. The company’s shares have surged 48.5% in the past year.