Nucor Corporation NUE has issued guidance for fourth-quarter and full-year 2018.

The steel giant expects earnings per share (EPS) in the band of $1.90-$1.95 for the fourth quarter. This reflects a decline from $2.13 in the third quarter but an increase from $1.20 in the year-ago quarter. Currently, the Zacks Consensus Estimate for fourth-quarter earnings is pegged at $1.95. The results in the year-ago quarter include a net benefit of $175.2 million or 55 cents per share associated with the impacts of U.S. federal tax legislation.

For 2018, Nucor expects record annual EPS in the range of $7.25-$7.30, marking an increase of roughly 22% from the earlier record earnings of $5.98 registered in 2008. Per the company, strong economic conditions in the United States resulting from regulatory and tax reforms supported earnings. The company also noted that the broad-based tariffs imposed under Section 232 have been a major tailwind contributing to 2018 earnings.

Moreover, the company continued to return capital to stockholders. It repurchased roughly 8.35 million shares of its common stock at an average price of $60.19 per share during fourth-quarter 2018. The company returned $1.3 billion of capital to shareholders in 2018, which includes share repurchase worth $854 million and dividends of roughly $485 million.

Nucor stated that around $1.5 billion is available under the share repurchase program. The company expects to end 2018 with issued and outstanding shares around 4% below the amount at the end of 2017. Moreover, cash and cash equivalents balance at the end of fourth quarter is expected to be stay flat compared with the balance at the end of the third quarter.

Nucor continues to witness strong demand and higher average prices on year-over-year comparison basis across most products and expects the same to continue into 2019. The company's top priority in deploying shareholders' capital is to deliver sustainable and profitable growth in the long term along with superior returns. Its commitment to raise shareholders’ value is reflected in impressive performance as it returned a total of $1.3 billion to shareholders in 2018 through dividends and share repurchases.

Nucor’s shares have lost 15.5% in the past six months compared with the industry’s 18.5% decline. 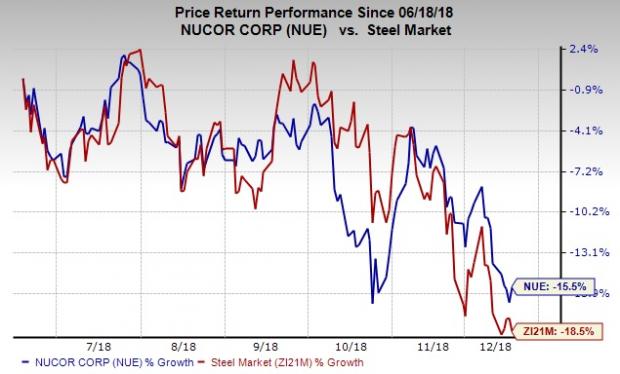 CF Industries has an expected earnings growth rate of 748% for the current year. The company’s shares have moved up 2.8% in the past year.

Mosaic has an expected earnings growth rate of 75.2% for the current year. The company’s shares have rallied 26.2% in the past year.

Cameco has an expected earnings growth rate of 66.7% for the current year. Its shares have gained 15.2% in a year’s time.