Will Avon's Growth Initiatives Provide Cushion to the Stock?

Shares of Avon Products, Inc. have lost 37% over the course of a year, primarily attributed to its dismal surprise history. The company lagged earnings estimates in four of the trailing six quarters, with negative sales surprises in six of the last nine quarters. The company also underperformed the industry’s decline of 17.7% in the same time frame. 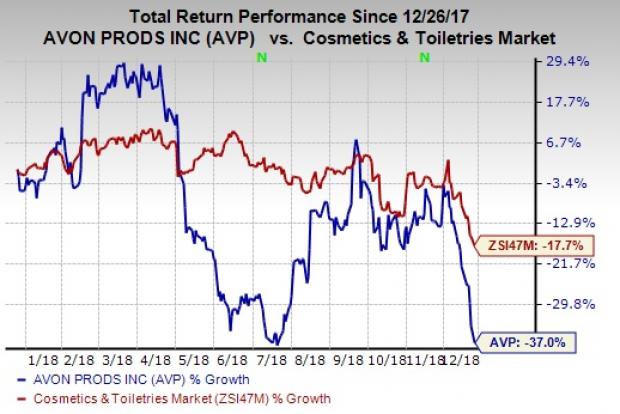 Impressively, the company accomplished total cost savings of roughly $40 million before taxes in the recently reported quarter. It remains on track to achieve its targeted run-rate savings of $350 million in 2018. Notably, it exceeded the cost-saving target of $230 million, realizing more than $250 million in 2017.

Additionally, management initiated the "Open Up Avon" strategy, which aims at bringing the company back on its growth trajectory. The company remains committed to attain long-term financial targets for 2021, thanks to the aforementioned strategy. This strategy mainly focuses on reviving its direct selling business, renovating the brand, and enhancing e-commerce and other capabilities to aid performance-driven transformation.

By 2021, the company intends to generate total cost savings of $400 million on the back of optimization of manufacturing and distribution; outsourcing efficiencies; zero-based redesigning of back-office functions; and managing revenues, interest and tax. Management also expects to invest roughly $300 million in commercial, digital & IT infrastructure projects. It aims to reinforce its financials, wherein its cash-generating abilities must exceed the investment plans. Moreover, it expects to achieve revenue growth in a low-single digit and margins in low-double digits by 2021.

Meanwhile, Avon remains focused on reigniting and re-energizing the Representatives, which are one of the key factors behind the success of its direct-selling business. Further, it has adopted new segmented approach to differentiate among its Representatives and reward them accordingly. The company started imparting training to Representatives by setting up new global academy in each country.

Although the aforementioned initiatives inspire optimism, it remains to be seen how far these will aid the company’s stock to return on its growth trajectory.

4 Finance Stocks That Escaped the Sector Shortfall in 2018