Here's What Investors Should Expect from AMD Stock in 2019

Shares of Advanced Micro Devices AMD dipped in morning trading Tuesday one day after it and fellow semiconductor power Nvidia NVDA surged. So, investors need to know if AMD is likely to return to its pre-market downturn performance in 2019, or if the historically cyclical nature of the chip industry is set to hurt the firm.

On Friday, tech investor and lead portfolio manager at the Wireless Fund, Paul Meeks, voiced his confidence in AMD. Meeks likened the chip firm to Intel’s (INTC - Free Report) run of dominance in the PC industry in the 1980s and ‘90s.

Meeks told CNBC that he predicts AMD stock will climb 50% within the next three years as it expands across data centers, servers, and gaming. “AMD will never become a household name like Intel or even like Boeing, but you're going to hear a lot more from it," he said last week.

Investors can see that shares of AMD had skyrocketed over the last three years. AMD stock was also on a stellar run in 2018 until it plummeted in the fall along with the broader market, driven by the likes of Apple AAPL and other giants.

AMD saw its stock price climb as high as 8% Monday. Yet, shares of AMD fell 3% to roughly $20 through mid-morning trading Tuesday. The dip has AMD stock resting roughly 41% below its 52-week high of $34.14 a share. 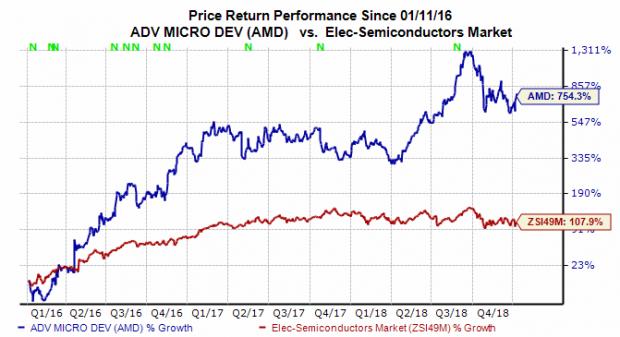 AMD is coming off a disappointing third quarter that saw the company’s revenues fall short of Wall Street expectations. The firm’s Q3 revenues climbed 4% from the prior-year quarter but fell 6% sequentially to $1.65 billion. AMD also provided subdued guidance on the back of slowing GPU demand from cryptocurrency miners.

Looking forward, the firm, which makes chips for the gaming and data centers industries, among others, is expected to see its Q4 revenues slip 2.7% to reach $1.44 billion, based on our current Zacks Consensus Estimate. The firm’s full-year revenues are expected to surge roughly 22% to reach $6.50 billion. But much of that growth is based on AMD’s impressive first-half of 2018.

Investors should also note that AMD’s Q1 2019 revenues are projected to fall 12.2% from the year-ago period. With that said, the company’s full-year 2019 revenues are expected to climb 5.3% above our current year estimate to reach $6.84 billion. We can, however, see that AMD’s annual revenues have gone up and down over the last 15 years, which helps show us just how cyclical the semiconductor business can be.

Things do look more positive for AMD when we move onto the other end of the income statement. The firm’s adjusted quarterly earnings are expected to pop 12.5% from the prior-year quarter to reach $0.09 per share. Plus, AMD’s full-year EPS figure is projected to skyrocket over 170%. Peeking even further ahead, the company’s fiscal 2019 earnings are expected to come in 36% higher than our 2018 estimate.

Clearly, AMD’s bottom-line growth appears impressive. And earnings growth has been proven to be one of the best long-term indicators of positive stock price movement. But we should note that AMD’s earnings estimate revision activity has trended in the wrong direction recently. This means at least some analysts are less optimistic about AMD’s future earnings growth.

AMD is Zacks Rank #3 (Hold) at the moment, and its earnings growth projections appear strong. With that said, the company’s top-line is expected to stumble over the next few quarters and expand only around 5% in 2019.

Overall, it is up to investors to decide if AMD stock presents a solid buying opportunity at the moment, simply because it rests roughly 41% below its 52-week high. But remember the chip industry looks poised to remain cyclical in nature and trade tensions between the U.S. and China still loom overhead.