For solar power generation, Florida’s physical and geographic condition is the third best in the United States, making it an ideal state for expansion of solar power. Yet, the state does not have a renewable energy portfolio standard and does not allow power purchase agreement, which drive utility investment in other states.

Nevertheless, residents of the state voted in favor of cleaner energy choices in November 2016 and legislators responded by passing Senate Bill 90 (SB 90). The SB 90, in turn, offered a tax rebate for those investing in renewable energy sources. Thanks to this legislature and some recent developments, the state ranks 2nd for projected solar capacity installed over the next 5 years, with nearly 5.5 gigawatts (GW) expected to come online (as per Solar Energy Industries Association).

Undoubtedly, increasing solar opportunities in Florida are luring utilities like Duke Energy to invest in the state’s solar market. The Hamilton Solar plant is a bright example of that. In 2018, the company also announced the construction plan for its first two solar generation projects – the Hamilton and the Columbia Plants.

Together, the Hamilton and Columbia solar power plants are expected to eliminate approximately 645 million pounds of carbon dioxide emissions in Florida during their first year of commercial operation. Apart from expanding Duke Energy’s commercial Renewables footprint, these projects totaling 149 MW, are expected to generate revenues worth $30 million.

In addition to building universal solar in the Sunshine State, the company’s subsidiary in Florida is helping more than 400 residential and business customers per month to interconnect their private solar systems to the local electric grid. Impressively, in the past five years, the number of customers who have interconnected their private solar in Florida increased by whopping 750%.

Considering all the aforementioned developments, we may conclude that Florida’s solar market currently offers ample growth opportunities for solar electricity players like Duke Energy. The company is gracefully progressing toward optimal utilization of the same through its efforts. On being fully operational in March 2020, the Columbia Solar plant will further expand the company’s solar footprint in the Sunshine State.

In a year’s time, shares of Duke Energy have rallied 10.9% compared with the industry’s 4.2% growth. 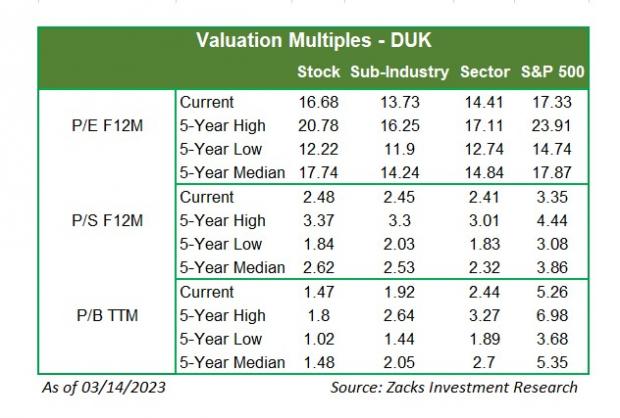 Ameren Corp has an estimated long-term earnings growth rate of 6.8%. It surpassed the Zacks Consensus Estimate for earnings in the trailing four quarters by an average of 15.4%.

CenterPoint has an estimated long-term earnings growth rate of 5.9%. It outpaced the Zacks Consensus Estimate for earnings in the trailing four quarters by an average of 6%.

Entergy Corp has an estimated long-term earnings growth rate of 7%. It exceeded the Zacks Consensus Estimate for earnings in the trailing four quarters by an average of 36.2%.