Musk broke down some of Tesla’s current financials in an email to all employees Friday. Tesla reported a 4% profit in the third quarter, which Musk referred to as Tesla’s “first meaningful profit in the 15 years.” The outspoken CEO pointed out that its Q3 profit was based on the higher average selling price of the Model 3 in North America.

Musk continues to expect Tesla to report a profit in Q4, just less than last quarter. Tesla also projects it will report profits in the first quarter of 2019 as it begins to ship Model 3 variants in Europe and Asia. “However, starting around May, we will need to deliver at least the mid-range Model 3 variant in all markets, as we need to reach more customers who can afford our vehicles,” Musk wrote.

Tesla and Musk have always planned to make the Model 3 an “affordable” mass-market vehicle. But right now, the cheapest Model 3 costs roughly $44,000.

Going forward, the company’s ability to lower costs becomes even more vital as the U.S. government tax credits come to an end over the next few years. “As a result of the above, we unfortunately have no choice but to reduce full-time employee headcount by approximately 7% (we grew by 30% last year, which is more than we can support) and retain only the most critical temps and contractors,” Tesla’s CEO continued.

“Tesla will need to make these cuts while increasing the Model 3 production rate and making many manufacturing engineering improvements in the coming months. Higher volume and manufacturing design improvements are crucial for Tesla to achieve the economies of scale required to manufacture the standard range (220 mile), standard interior Model 3 at $35k and still be a viable company. There isn't any other way.”

Overall, Tesla delivered 245,240 vehicles in 2018 to help it blow past 2017’s 102,807 total. Tesla noted that it delivered almost as many vehicles in 2018 than it did throughout the EV company’s entire history. Increased Model 3 production helped drive Tesla’s growth after it had struggled to churn out its less expensive sedan during the first half last year.

Looking ahead,Tesla’s Q4 revenues are projected to skyrocket over 113% from the year-ago quarter to reach $7.01 billion, based our current Zacks Consensus Estimate. Meanwhile, Tesla’s fiscal 2018 revenues are expected to soar roughly 80% from $11.8 billion in 2017 to reach $21.28 billion.

Moving on, Tesla’s adjusted Q4 earnings are projected to skyrocket 170% from an adjusted quarterly loss to hit $2.13 a share. Tesla is still expected to report a full-year loss of $1.26 per share. But, peeking ahead to fiscal 2019, Tesla is projected to post adjusted earnings of $5.85 a share. This would mark a 564% surge above our fiscal 2018 projection. 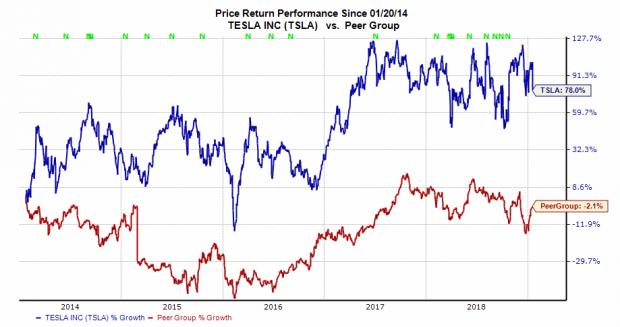 Shares of Tesla fell 12.97% during regular trading hours Friday to $302.26 a share on the back of the job cuts announcement. This marked a roughly 22% decline from its 52-week high of $387.46 per share and sets up what could be a solid buying opportunity for those high on Tesla. But of course TSLA stock has been turbulent over the last few years.

At the end of the day, Tesla and Musk hope to become the vehicle firm of the future and much more. “Full self-driving, Model Y, Semi, Truck and Roadster on the vehicle side and Powerwall/pack and Solar Roof on the energy side are only the start,” Musk wrote in conclusion.