Shares of NVIDIA Corporation NVDA lost 13.8% on Jan 28 after cutting its fiscal-fourth quarter revenue projections. The chipmaker attributed weakness in its gaming and data-center businesses to soft demand conditions in China and the increasing wariness by its customers.

Shares of Intel Corporation INTC declined more than 7.1% in after-hour trading on Jan 24 owing to a tepid view and revenue miss. The decline triggered broader losses for semiconductor stocks with both Nvidia and Advanced Micro Devices, Inc. AMD losing more than 2% in after-hour trade.

However, focusing only on these reverses would detract from the recent successes of semiconductor stocks. The sector is having a banner year and has consistently beaten the broader market over the past five years. This is why betting on select semiconductor stocks still looks like a strong option.

While broader markets have enjoyed a particularly good year up to now, it’s been a great one for semiconductor stocks. The PHLX Semiconductor Index (SOX) is up 8.6% year to date and has even gained more than 10% over the past three months, which takes the volatile end to 2018 into account. 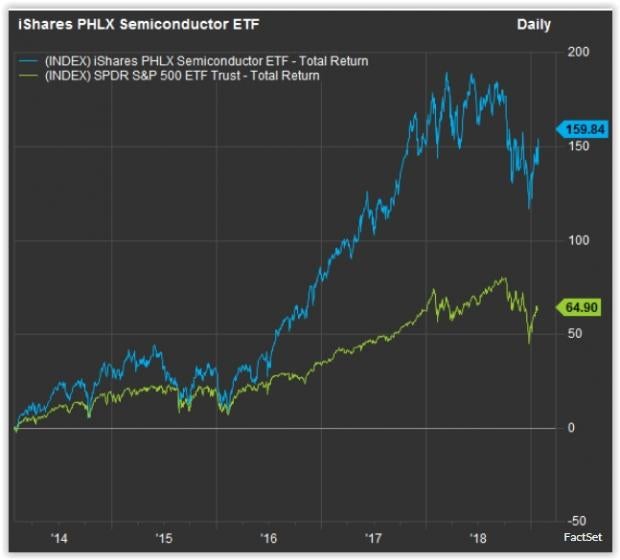 The broader iShares PHLX Semiconductor ETF (SOXX) is also up by the same margin year to date. More importantly, it has outperformed the SPDR S&P 500 ETF (SPY) on a total returns basis over the last five years. The only downside to semiconductor investing is that one would have to put up with increased volatility for higher returns.

Semiconductor stocks received a beating after Intel issued a dismal guidance. But the chip major and NVIDIA’s troubles obscures strong earnings from other sector participants. Intel’s results were released shortly after SOX saw its largest gain in almost a month.

Further, single day reverses, like the one which followed Intel’s earnings detract from the strong tailwinds the sector enjoys over the longer term. The changing nature of smartphone and computing will preserve and boost semiconductor demand. Among the trends likely to dominate the near future are 5G and AI.

Additionally, the increasing level of applications in unrelated sectors such as retail illustrates the secular movement toward technology across industries. This trend is likely to reshape economies, fueled by semiconductors.

The only major impediment to the sector’s gains at this point is the U.S.-China trade war. However, economic and corporate losses on both the sides could force a settlement in the near term. This means that any losses on this account would only be temporary.

Recent results from some major semiconductor companies have led to fresh questions about the sector’s near-term prospects. However, not all earnings reports have been disappointing and price gains have been substantial in 2019, maintaining the outperformance witnessed over the last five years.

Further, increasing applications across unrelated sectors are likely to sustain and boost demand in the future. This is why it still makes sense to bet on select semiconductor stocks. However, picking winning stocks may be difficult.

This is where our VGM Score comes in handy. Here V stands for Value, G for Growth and M for Momentum and the score is a weighted combination of these three scores. Such a score allows you to eliminate the negative aspects of stocks and select winners. However, it is important to keep in mind that each Style Score will carry a different weight while arriving at a VGM Score.

We have narrowed down our search to the following stocks, each of which has a Zacks Rank #2 (Buy) and a solid VGM Score. You can see the complete list of today’s Zacks #1 Rank stocks here.

Amkor Technology Inc. AMKR is one of the largest providers of semiconductor packaging and test services.

Amkor Technology has a VGM Score of A. The company has expected earnings growth of 32.7% for the current year.

Cree, Inc. CREE is a manufacturer of semiconductors that enhance the value of solid-state lighting, power and communications products by significantly increasing their energy performance and efficiency.

Cree has a VGM Score of B. The company’s expected earnings growth for the current year is more than 100%.

Lattice Semiconductor has a VGM Score of B. The company’s expected earnings growth for the current year is 18%

On Track Innovations has a VGM Score of B. The company’s projected growth rate for the current year is 66.7%.