SkyWest (SKYW - Free Report) reported a year-over-year increase in block hours (a measure of aircraft utilization). Notably, this key metric improved 5.6% (6,187) to 117,618 in January 2019. The addition of the new E175 jet to the regional carrier’s fleet since last January led to this upside.

In January, SkyWest’s dual class fleet (E175, CRJ900 and CRJ700) accounted for 65.7% of the carrier’s total block-hour production compared with approximately 58.8% a year ago. Following the completion of the sale of ExpressJet Airlines to ManaAir LLC — a United Airlines joint venture — in the same month, SkyWest Airlines accounted for the entire block-hour production. The year-ago figures also exclude ExpressJet for comparability purpose. It should be noted that United Airlines is United Continental’s (UAL - Free Report) wholly-owned subsidiary.

However, load factor (percentage of seats filled with passengers) at SkyWest contracted 40 basis points to 74.9%. On the flip side, the number of departures and passenger count increased 1.7% and 6.7%, respectively, in the month.

SkyWest, which sports a Zacks Rank #1 (Strong Buy), has been performing well of late. In a month’s time, the stock has gained 13.4%, outperforming its industry’s 7.7% growth. You can see the complete list of today’s Zacks #1 Rank stocks here. 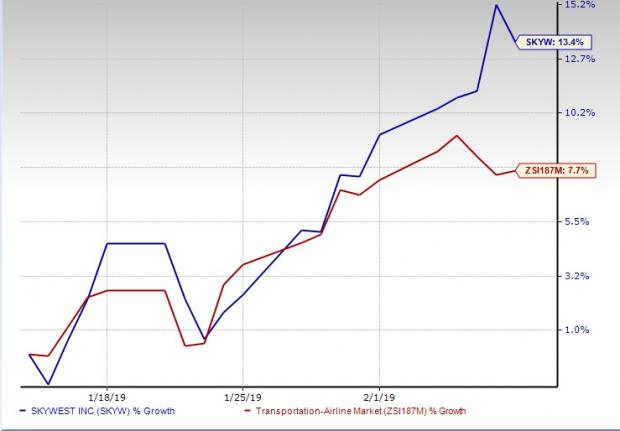 The upbeat price performance can be primarily attributed to two impressive developments over the last 30 days — its outperformance in the fourth quarter of 2018 and the 20% hike in its quarterly dividend to 12 cents per share (annualized 48 cents a share).

Shares of Azul and Air France-KLM have rallied more than 63% and 18%, respectively, in the past six months.