What Investors Need to Know About Investing in Marijuana Stocks

Marijuana has come a long way since California legalized cannabis for medicinal use back in 1996. Today, the industry and marijuana look to be on the cusp of unprecedented acceptance, with major international giants investing billions into publicly traded cannabis companies. So, let’s look at what investors need to know about the marijuana industry and how to invest in the future of pot.

Last October, Canada became just the second nation in the world to officially legalize marijuana, in a move that could be a sign of an impending wave of legalization movements. By the end of 2018, eight cannabis companies were listed on the Toronto Stock Exchange and Deloitte projects that $5.4 billion will be spent on cannabis products in Canada in 2019 alone. Plus, ArcView Group forecasts that global spending on legal cannabis is expected to grow 230% and reach $32 billion in 2020, up from $9.5 billion in 2017.

The market research firm projects that over $23 billion of that $32 billion will come from the United States, based on the assumption that more states will legalize the drug. We should note that more than 200 million Americans currently live in states that have legalized marijuana for medical or recreational use and 66% of Americans now support legalizing marijuana, according to Gallup.

In the fourth quarter of 2018 alone, $7.9 billion of capital was raised by cannabis companies globally, according to the Viridian Cannabis Deal Tracker. Some of this money is coming from major global businesses. Alcoholic beverage giant Constellation Brands (STZ - Free Report) invested $4 billion in Canopy Growth (CGC - Free Report) in mid-August to up its stake in the cannabis company to 38%. The deal also gives Constellation the right to invest an additional $3.4 billion to acquire a controlling stake in Canopy.

Along with Constellation, Heineken (HEINY - Free Report) rolled out a cannabis-infused sparkling water in California under its Lagunitas brand last summer in some regions where it’s legal. Molson Coors Brewing Co. (TAP - Free Report) announced last year that it plans to introduce cannabis-infused beverages for the Canadian market. On top of that, Scotts Miracle-Gro (SMG) has inched its way into the marijuana business after its roughly $450 million purchase of U.S. hydroponic distributor Sunlight Supply—hydroponics is a popular method for growing marijuana, along with other plants and vegetables.

Investors also need to know that there are other aspects of the marijuana industry that don’t focus on recreational use, such as Cannabidiol. CBD is a non-psychoactive cannabis compound that is currently being infused in products such as skin care and coffee. In fact, as of late last year, over 40 states had passed some kind of CBD legalization.

In fact, GW Pharmaceuticals last summer secured the first U.S. FDA approval for a drug derived from the marijuana plant. Epidiolex will be used to treat rare forms of epilepsy and the firm is reportedly developing other experimental CBD-based drugs. “We’ve shown how cannabinoids can be bona fide medical treatments,” GW CEO Justin Gover told the Wall Street Journal in January.

Clearly, some big companies have made significant jumps into what many expect to be a booming global industry. But the ability to invest in pure-play marijuana companies is still very limited and many are based in Canada. Some of the biggest pure-play marijuana firms are Cronos Group, Canopy Growth, Tilray TLRY, Aurora Cannabis ACB, a marijuana-based ETF called the ETFMG Alternative Harvest ETF (MJ - Free Report) , KushCo Holdings (KSHB - Free Report) , and a few others.

Another interesting play is Innovative Industrial Properties (IIPR - Free Report) . This REIT focuses on the grow operations and plans to buy buildings and lease them to medical marijuana growers. Still, at this time, many big investment funds won’t get involved in the industry as it is illegal on the federal level in the U.S. This means these stocks can be somewhat volatile. 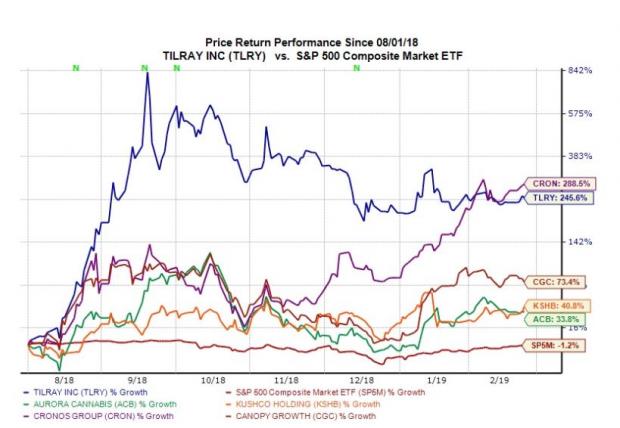 The jump from the first U.S. state to legalize medical marijuana to the complete recreational legalization of cannabis in Canada happened in roughly 20 years. There is clearly much more to learn as companies, investors, and governments feel their way through these uncharted waters. In the end, legalize marijuana and CBD-based drugs seem as though they will play an integral role in North America, which means now could be time to take a chance and invest before things really get rolling.

In addition to the companies you learned about above, we invite you to learn more about investing in pot stocks. On Tuesday, February 26, our team of experts will reveal what we believe is the single best way to make money from legal marijuana.